Girma Wolde-Giorgis net worth: Girma Wolde-Giorgis is an Ethiopian politician who has a net worth of $1.5 million dollars. Girma Wolde-Giorgis was born in Addis Ababa, Ethiopia in December 1924. He was the President of Ethiopia from 2001 to 2013. Girma received certificates in Management, Air Traffic Management, and Air Traffic Control. Girma was one of the first Ethiopians in the Ethiopian air force. He wrote a book on the fundamentals of the airlines. He condemned the apartheid in South Africa and was an activist. He graduated from the Oletta Military Academy in 1944 as a Sub-Lieutenant. In 1951 Girma became Director General of the Minister of Trade, Industry, and Planning. He became head of Civil Aviation of Eritrea in 1955. In 1957 he became Director General of the Ethiopian Civil Aviation Authority. In 1961 Girma became a member of the lower house of the Imperial Ethiopian Parliament. He was elected house speaker for three years in a row. In 2000 he became a member of the House of People's Representatives of the Federal Democratic Republic of Ethiopia. Girma was elected in 2001 by a unanimous vote from the Ethiopian Parliament. He was then re-elected in 2007. The Ethiopian president does not have a lot of power, as most of that power lies with the Prime Minster. In 2013 he was succeeded by Mulatu Teshome. Girma is married and has five children. 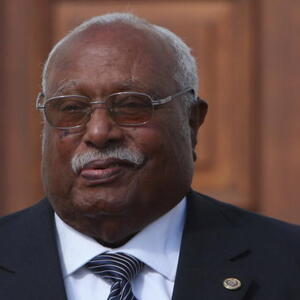