Roosevelt was a Democrat and won an unprecedented four Presidential elections. FDR led the United States through his New Deal which involved increasing the role of the federal government to boost the nation's economy. He served as a member of the New York State Senate for the 26th District from 1911 to 1913. From 1913 to 1920 Roosevelt served as Assistant Secretary of the Navy. From 1929 to 1932 he was the 44th Governor of New York. Roosevelt was President during the attack on Pearl Harbor in 1941 which he called a "date which will live in infamy". He has often been ranked as one of the top three U.S. Presidents by scholars. He was married to Eleanor Roosevelt from 1905 to his passing and had six children. Franklin D. Roosevelt passed away on April 12, 1945 at 63 years old. 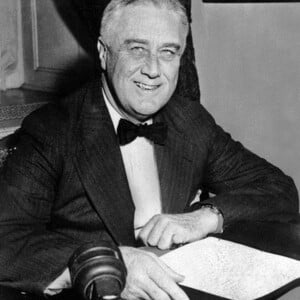