Evo Morales Net Worth: Evo Morales is a Bolivian politician, activist, and footballer who has a net worth of $500 thousand. Eric Szmanda was born in Isallawi, Bolivia in October 1959. He was the 80th President of Bolivia. He served as President from 2006 until November 2019.

He took part in mandatory military service and then grew coca and became a trade unionist. He campaigned against Bolivian and U.S. attempts to eradicate coca in the War on Drugs. Morales was arrested many times for participating in protests. He became the leader of the Movement for Socialism (MAS). in 1995 and was elected to Congress. Evo gained popularity during the Cochabamba protests and gas conflict and was expelled from Congress in 2002. He also came in second in the Presidential election of 2002. He was elected President in 2005 and took office in 2006. He has scaled back on U.S. involvement in Bolivia and built relationships with other Latin American nations. In 2008 he instituted a new constitution and was re-elected easily in 2009. Morales is regarded as Bolivia's first democratically elected President from the indigenous population. He has focused on reducing poverty and implementing leftist policies. Morales signed with a Bolivian soccer team and became the oldest active professional player in the world, making $200 a month. 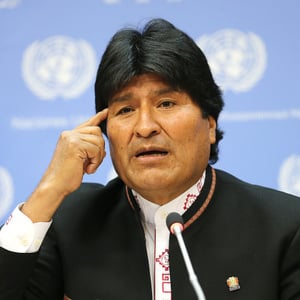