What is Dmitry Medvedev's Net Worth?

Dmitry Medvedev is a Russian politician who has a purported net worth of $2 million. Dmitry Medvedev serves as the deputy chairman of the Security Council of Russia, a position he has held since 2020. Before this, he was the president of Russia from 2008 to 2012, and then prime minister from 2012 to 2020 under president Vladimir Putin. As president, Medvedev led a modernization program that aimed to update Russia's economy while reducing its reliance on gas and oil.

Medvedev's political career began as the election campaign manager (and later an advisor) of the St. Petersburg Mayor Anatoly Sobchak. It was during this time that Medvedev befriended Vladimir Putin.

Russian dissident Alexei Navalny has accused Dmitry Medvedev of being far richer than his officially disclosed financial reports, which paint a relatively modest picture. In 2016 Navalny published a report that accused Medvedev of secretly owning a 200-acre estate that features a three helipads, multiple pools, a ski run and multiple structures.

The following year Navalny and his Anti-Corruptin Foundation published a second report which further accused Medvedev and his close family members of owning over $1 billion worth of real estate, yachts, apartments and wineries. The report alleged that these assets were given to Medvedev by various oligarchs or through extremely favorable loans provided by state owned banks. The report sparked outrage in Russia. Medvedev called the allegations "nonsense."

Dmitry Medvedev was born on September 14, 1965 in Leningrad, Soviet Union as the only child of Yulia, a professor at Herzen State Pedagogical University, and Anatoly, a chemical engineer and professor at Leningrad State Institute of Technology. Growing up, Medvedev demonstrated a high degree of intellectual curiosity. At the age of 17, he enrolled at Leningrad State University, where he studied law. Medvedev subsequently pursued his graduate education at the school.

At Leningrad State University, one of Medvedev's professors was politician Anatoly Sobchak. After graduating with his undergraduate degree in 1987, Medvedev joined Sobchak as the head of his successful campaign for a seat on the newly created Soviet parliament. Following this, Medvedev became a docent at his alma mater, which was renamed Saint Petersburg State University; he also worked at a small law consultancy firm he had founded with his friends.

Vladimir Putin became the Russian prime minister in 1999; shortly after this, Medvedev was brought in from St. Petersburg to become deputy head of the presidential staff. As one of the politicians who was closest to Putin, he went on to serve as his campaign manager during the 2000 presidential elections. After Putin won, Medvedev was appointed as chairman of the board of directors of the gas company Gazprom. He subsequently served as deputy chair from 2001 to 2002 before becoming chairman again from 2002 to 2008. During this time, Medvedev became presidential chief of staff, and then first deputy prime minister of Russia.

In late 2007, Putin named Medvedev as his preferred successor. During his presidential campaign, Medvedev promised to raise funding of the National Priority Projects, lead efforts to modernize the Russian economy, and reduce corruption in government. He was ultimately elected president in March of 2008. As he had promised, he appointed Putin as prime minister. Early in his presidency, Medvedev earned praise in Russia for his handling of the Russo-Georgian War. He was also recognized for handling the economic crisis brought on by the Great Recession. In regard to the economy, he launched his modernization program to diversify the economy and reduce Russia's reliance on gas and oil. Also on Medvedev's agenda were police reform and anti-corruption measures, although he was accused of corruption himself.

Toward the end of his first term, Medvedev recommended Putin as a presidential candidate to the United Russia party congress. Although Putin had been forced by term limits to leave his post in 2008, the two men had made a deal that would allow him to return to the presidency. 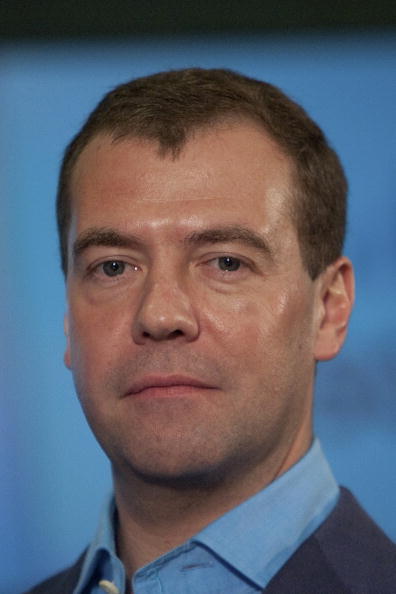 After Putin became president again in May of 2012, Medvedev was appointed the new prime minister. He was also appointed as the chairman of the ruling party, United Russia, making him the first prime minister to be affiliated with a political party. Medvedev went on to be nominated by Putin for another term in 2018. During this time, mass protests were held throughout Russia in response to a new retirement age hike.

Along with the rest of the Cabinet, Medvedev resigned in January of 2020 following Putin's announcement of wide-reaching constitutional amendments. He claimed his resignation was to allow Putin to make the changes, which would significantly reconfigure Russia's balance of power. Following this, Medvedev was appointed as deputy chairman of the Security Council of Russia.

In 1993, Medvedev wed his school sweetheart Svetlana Linnik. Together, they have a son named Ilya. Among his many hobbies, Medvedev collects original vinyl records and likes to listen to classic British rock. He is also an avid swimmer, jogger, chess player, and photographer. In 2010, one of his photographs sold at a charity auction for around $1.75 million.

With his wife, Medvedev lives in an upscale apartment in Moscow. As we mentioned earlier in the article, Medvedev also reportedly owns a vast array of mansions, wineries, and other properties, which he acquired through his corrupt political dealings. Opposition leader Alexei Navalny published a report in 2016 revealing that Medvedev owns a massive summer estate comprising a skin run, a swimming pool, multiple helipads, communication towers, and even a house built for ducks. Allegedly, the area is 30 times the size of Moscow's Red Square.