Ariel Sharon net worth: Ariel Sharon was the eleventh Prime Minister of Israel who has a net worth of $20 million dollars. Born in Kfar Malal, British Palestine on February 26, 1928, Sharon's birth name was Ariel Scheinermann. He has been a member of the Likud political party, followed by the Shlomtzion in 1977, the Likud again from 1977 to 2005, and most recently the Kadima from 2005 to 2006.

He attended the Hebrew University of Jerusalem as well as Tel Aviv University. He began as a military officer and practiced Judaism. He was part of the Haganah branch in the Israel Defense Forces from 1948 to 1974 and ranked as a Major General. He reported to the Paratroopers Brigade, Unit 101, and the Golani Brigade, and he fought in the Israeli Independence War, Suez Crisis, Six-Day War, and the Yom Kippur War. He assumed office as the Prime Minister of Israel on March 7, 2001 until April 14, 2006 under President Moshe Katsav. He was preceded by Ehud Barak and succeeded by Ehud Olmert. Prior to being Prime Minister, Sharon was Minister of Foreign Affairs from October 13, 1998 to June 6, 1999 under Prime Minister Benjamin Netanyahu. He had also served as Minister of Energy and Water Resources, Minister of Housing and Construction, Minister of Industry, Trade and Labour, and Minister of Defense. Sharon endured a stroke in 2006, causing him to live in a permanent vegetative state until his death after eight years in a coma on January 11, 2014. Sharon had been married and widowed twice with three children by the names of Gur, Omri, and Gilad. The $250 million Ariel Sharon Park theme park is being constructed in Tel Aviv. 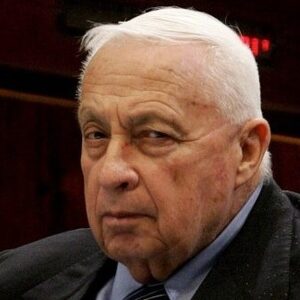