Ali Khamenei Net Worth: Ali Khamenei is the Supreme Leader of Iran and a Shia Cleric who has a net worth of $500 thousand. Ali Hosseini Khamenei was born in Mashhad, Iran in July 1939. He is considered to be the most powerful political authority in Iran. In 1981 he was the victim of an assassination attempt and his right arm was paralyzed. Forbes listed Ali as the 21st most powerful person in the World in 2012. Khamenei joined the Combatant Clergy Association political party in 1977. From 1979 to 1987 he was also associated with the Islamic Republican Party. Ali became the Leader of that party in July 1981 and held the position until May 1987. From October 1981 to August 1989 he served as the 3rd President of Iran. He received over 95% of the vote for President in 1981. Khamenei assumed office as the 2nd Supreme Leader of Iran in June 1989. He succeeded Ruhollah Khomeini, who passed away. Khamenei has issued a fatwa saying that stockpiling and producing nuclear weapons was forbidden under Islam. He condemned the September 11, 2001 attacks and called for a condemnation of worldwide terrorist activities. He has also authored seven books. Ali married Khojaste Bagherzadeh in 1964 and has six children.

Hidden Fortune? Though the Iranian regime is quick to point out that Ali Khamenei lives an extremely modest life, a 2013 investigation by Reuters explored rumors that he controls a financial empire that is worth north of $100 billion. His assets are allegedly controlled through an organization called "Setad Ejraiye Farmane Hazrate Emam" which translates to Headquarters for Executing the Order of the Imam. Setad reportedly controls a vast portfolio of stakes in real estate, finance, oil, telecom, farming and more. Reuters believes that one person controls Setad: Ali Khamenei. Reuters also disclosed that it found no evidence that Ali had tapped the empire to benefit himself personally. However he has allegedly used Setad to exert power through mechanisms like asset and real estate forfeitures from people he perceives as enemies. 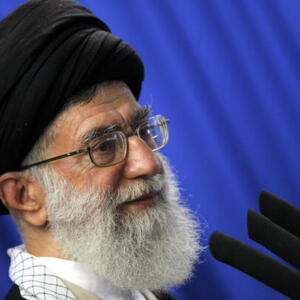