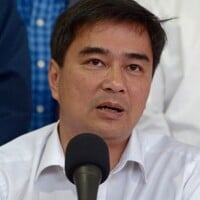 Abhisit Vejjajiva Net Worth: Abhisit Vejjajiva is a Thai politician who has a net worth of $2 million. Abhisit Vejjajiva was born in Newcastle upon Tyne, United Kingdom in August 1964. Vejjajiva was the Prime Minister of Thailand from 2008 until 2011. He graduated from Eton College and the University of Oxford. At 27 years old Vejjajiva was elected to the Parliament of Thailand. He is a member of the Democrat Party and was elected as a member of the Thai House of Representatives for the Bangkok Metropolitan Region – 6th District in July 1992 and held the position until December 2013. Vejjajiva became the Leader of the Democrat Party in March 2005. He served as the 27th Prime Minister of Thailand from December 2008 until August 2011. Vejjajiva was also the Leader of the Opposition from March 2005 until December 2008 and then again from August 2011 until December 2013. The same month that he resigned as Leader he was formally charged with murder from a crackdown on demonstrators that killed 90 people in 2010. Vejjajiva promoted a "People's Agenda" and administered two economic stimulus packages. His government faced protests in 2009 and 2010 which led to military crackdowns and casualties. When he was appointed Prime Minister in 2008 Vejjajiva declared personal assets worth $51.8 million baht or nearly $2 million USD. He has never worked in the private sector and gained his wealth as gifts or inheritances.