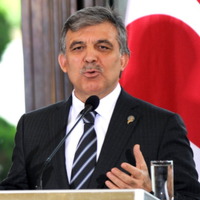 Abdullah Gül Net Worth: Abdullah Gül is a Turkish politician who has a net worth of $2 million. He was born in October of 1950 and recently served as the president of Turkey, a position he first held in August of 2007. From 2002 through 2003, Gul took a four-month term as prime minister of the country. He also worked as minister of foreign affairs throughout the 2000s, serving in office from 2003 until 2007. Before his initial term, Gul was nominated by Recep Tayyip Erdogan, who was prime minister at the time. It was an announcement that received widespread positive responses from the public. Though his initial nomination was turned down due to his personal and political views on certain topics, Gul went on to earn the presidential bid, eventually winning the election despite his initial setbacks. He was born in Kayseri, which is located in the central portion of Anatolia. His birthdate is considered significant as it was also the 27th anniversary of Turkey's declaration of independence. Identifying as a Turkish Muslim, Gul's ancestors have lived in the Gulluk district of their city for more than 100 years. This data was tracked through genealogy facts and figures as part of his presidential candidacy.