Nick Clegg Net Worth: Nick Clegg is a British politician who has a net worth of $4 million. Nick Clegg was born in Chalfont St Giles, Buckinghamshire, England in January 1967. Clegg has served as Deputy Prime Minister of the United Kingdom and Lord President of the Council since May 2010.

Clegg studied at the University of Cambridge, the University of Minnesota, and the College of Europe. He was an award winning journalist for the Financial Times and worked as a skiing instructor and at a bank office. He has been a contributor for many political books and pamphlets. Clegg is a member of the Liberal Democrats political party. He served as a member of the European Parliament for East Midlands from June 1999 until June 2004. He became a Member of Parliament for Sheffield Hallam in May 2005. Clegg served as Liberal Democrat Home Affairs Spokesman from March 2006 until December 2007. At that time he assumed the office of Leader of the Liberal Democrats. He has served as Deputy Prime Minister of United Kingdom and Lord President of the Council under Prime Minister David Cameron since May 2010. Nick married Miriam Gonzalez Durantez in 2000 and has three children. 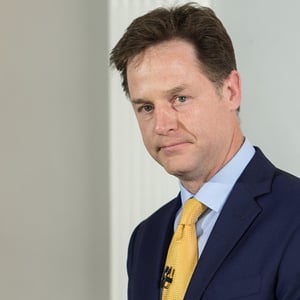