Annan's priorities as Secretary-General were to revitalize the United Nations through a comprehensive program of reform; to strengthen the Organization's traditional work in the areas of development and the maintenance of international peace and security; to encourage and advocate human rights, the rule of law and the universal values of equality, tolerance and human dignity found in the United Nations Charter; and to restore public confidence in the Organization by reaching out to new partners and, in his words, by "bringing the United Nations closer to the people. Annan and the United Nations were the co-recipients of the 2001 Nobel Peace Prize "for their work for a better organized and more peaceful world. Kofi Annan is the Chairman of The Elders, a group founded by Nelson Mandela. Between February and August 2012, Annan was the UN–Arab League Joint Special Representative for Syria, helping find a resolution to ongoing conflict there. Annan quit after becoming frustrated with the UN's lack of progress with regard to resolving the conflict, stating "…when the Syrian people desperately need action, there continues to be finger-pointing and name-calling in the Security Council." Kofi Annan died on August 18, 2018 at the age of 80. 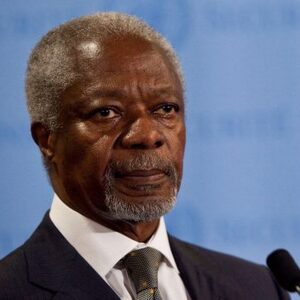