John Major Net Worth: John Major is a British conservative politician who has a net worth of $50 million. John Major was born March 29, 1943 in Carshalton, United Kingdom. "Sir" John Major served as Prime Minister of the United Kingdom and Leader of the Conservative Party from 1990 to 1997. He previously held the posts of Chancellor of the Exchequer and Foreign Secretary in the Thatcher Government and was the Member of Parliament for Huntingdon from 1979 to 2001.

Major went on to lead the Conservatives to a fourth consecutive election victory, winning the most votes in British electoral history with over 14 million in the 1992 general election (with a much reduced majority in the House of Commons) and remains to date the last Conservative Leader to win an outright majority at a general election. Born to the former music hall performer Tom Major-Ball, who was 64 years old when his son John was born, John Roy Major attended primary school at Cheam Common and in 1954 attended Rutlish School in Merton. In his early political career, Major stood as a candidate for Lambeth London Borough Council at the age of only 21 (1964) and was elected in the Conservative landslide in 1968. Sir John was awarded the Companion of Honour by the Queen in 1999 and he stood down from Parliament in 2001. On St. George's Day, 2005, Sir John was appointed a Knight Companion of the Most Noble Order of the Garter by HM Queen Elizabeth II. 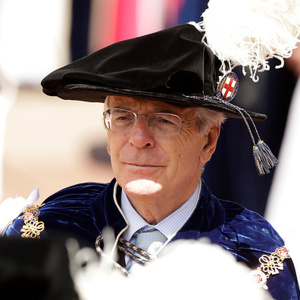