Jean Bertrand Aristide Net Worth: Jean-Bertrand Aristide is a former Haitian Catholic priest and politician who has a net worth of $800 million dollars. Born in 1953 in Port-Salut, Sud Department, Jean-Bertrand Aristide attended the college Notre Dame and the State University of Haiti. He traveled the globe for several years before moving back to Haiti to become ordained as a Salesian priest. Aristide became a public opponent of Haiti's dictatorship, particularly Jean-Claude Duvalier, and he was exiled to Montreal for three years. During the mid-80s, he returned to Haiti as civil unrest with the regime grew and became one of the most important figures in the "ti legliz" movement that swept Haiti. He developed an orphanage in one of the poorest parts of Port-au-Prince and ran it as an example of what democracy could look like. Opponents made four attempts on Aristide's life, including one where 100 armed men stormed his Sunday's mass and burned his church, killing 13. As a result, he was ordered to leave Haiti, but thousands of citizens blocked him from being able to access the airport, and soon after, he was stripped of his Salesian priesthood. Aristide won Haiti's first presidential election in 1990, though he was overthrown in a coup eight months later and was exiled to Venezuela and later the United States. American President Bill Clinton deployed troops to Haiti in the 1994 and reinstated Aristide to his elected position. He won again in 2000, and four years later, was again overtaken in a coup d'etat and exiled to Jamaica and South Africa, where he and his family remained until 2011. Aristide worked at the University of South Africa and learned the language before returning to Haiti in early 2011. Aristide and his wife, Mildred Trouillot, have been married since 1996 and have two children. 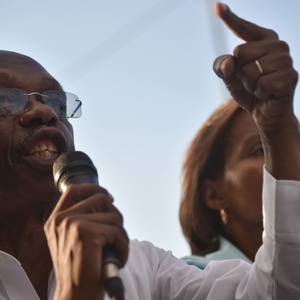