Jack Layton net worth: Jack Layton was a Canadian politician who had a net worth of $6 million. Jack Layton was probably most well-known for being the leader of the New Democratic Party from 2003 to 2011. He was born in Montreal and raised in Hudson, Quebec. Layton was the son of Conservative MP Robert Layton. He had his first taste of politics when he was elected as student council president in his high school. Layton then attended McGill University where he graduated with an Honours BA in Political Science. During the time of study, he was the Prime Minister of Quebec Youth Parliament.

Layton's family moved to Toronto the same year he graduated from McGill. The following year, Layton graduated from York University with a PhD in Political Science. He would later become a professor at Ryerson, York and University of Toronto. While at Ryerson and York, Layton developed strong relationships with prominent figures in Toronto. This led to his first election to Toronto City Council in 1982. He was quickly recognized as one of the most outspoken members of the council and a left-wing leader. He was one of the first to advocate rights for AIDS patents.

In 1985, Layton moved to Metropolitan Toronto council and by the 1988 Municipal electrons, he traded places with Dale Ally – Ally moved to Metropolitan and Layton returning to Toronto Council City. In 1991, Layton unsuccessfully ran for mayor. In 2003, he was elected as leader of NDP. Under his leadership, the party grew in popularity, gaining seats in the 2004, 2006 and 2008 elections. In the May 2011 election, Layton led the NDP to a record number of seats in the House of Commons (103 from 37). Layton was the first NDP leader to become the opposition leader. It goes without saying that Layton was the driving force behind the recent success of the party, making him the most notable political leader in the party's 50 year history. Just months after achieving his biggest triumph, Jack Layton died of cancer on August ww, 2011 at the age of 61. 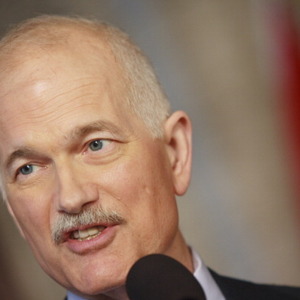