Imelda Marcos net worth: Imelda Marcos is a Filipino politician and ambassador who had a peak net worth of $5 billion. Imelda Marcos was born Imelda Remedios Visitacion Trinidad Romualdez in Manila, Philippines in July 1929. She is the widow of former Philippine President Ferdinand Marcos and makes up half of their conjugal dictatorship.

She is well known for her collection of over a thousand pairs of shoes. She started off as a singer and model before meeting her husband. She held positions in the government that let her travel around the world accumulating real estate and artwork. She served as Ambassador Plenipotentiary and Extraordinary, Minister of Human Settlements, Governor of Metropolitan Manila, Mambabatas Pambansa from Region IV-A, and was a Member of the Philippine House of Representatives. President Marcos was accused of assassinating Benigno Aquino, Jr., which led to the People Power Revolution that forced the couple out of office and into exile in Hawaii. They were later given amnesty and returned to the Philippines. Her collection of shoes is now featured partially in the National Museum of the Philippines. Imelda Marcos has been the subject of the 2003 documentary Imelda, as well as multiple songs. 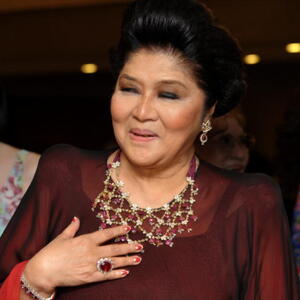