Gordon Brown Net Worth: Gordon Brown is a British politician who has a net worth of $15 million dollars. The former Prime Minister of the UK, Gordon Brown served as PM from 2007 to 2010, when he resigned. He was also a former Leader of the Labour Party, and Chancellor of the Exchequer for ten years.

Born James Gordon Brown on February 20, 1951, in Giffnock, Renfrewshire, Scotland, he is best known on the political scene for playing key roles in the UK as Prime Minister of the kingdom and Leader of the Labour Party between 2007 and 2010. Brown made his career beginnings both as a lecturer at a further education college and a television journalist, right after he walked out from the University of Edinburgh with a PhD degree in history. He joined the Parliament in 1983 as the MP for Dunfermline East. Five years later, he entered the Shadow Cabinet as Shadow Secretary of State for Trade, and then he was promoted to Shadow Chancellor of the Exchequer in 1992. The 2007 victory of the Labour's party made him Chancellor of the Exchequer, a position that he held for 10 years and thus became the longest-serving holder of that office in modern history. It was the same year, when Brown stepped into Tony Blair's shoes both as Prime Minister and Labour Leader following his resignation from the both positions. Brown was chosen to replace Tony in an uncontested election. After his three-year-turn, Gordon Brown officially resigned as Prime Minister and Leader of the Labour Party on May, 11, 2010. He played a large role in the Scottish Independence referendum of 2014. 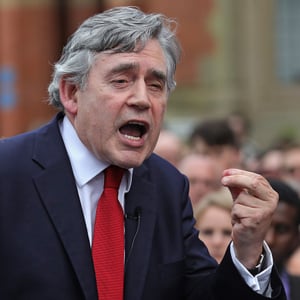