He attended Superior Normal School, Paris as well as the Free School of Political Studies and followed Roman Catholicism. He was married to Claude Cahour and had one child by the name of Alain Pompidou. George Pompidou assumed office as Prime Minister of France on April 14, 1962 until July 10, 1968. He served under President Charles de Gaulle. He was eventually elected as the President of France as well as recognized as the Co-Prince of Andorra on June 20, 1969. Prior to his stint in office Pompidou taught literature to children. Some of Pompidou's presidential milestones include the initiation of the Arianespace and TGV projects, which focused on nuclear affairs. His major intentions were to implement modernization of Paris, which included the construction of the modern art museum known as the Centre Beaubourg, now known as Centre Pompidou in honor of his achievements. Pompidou died on April 2, 1974 while in office. His death was claimed to be unexpected. 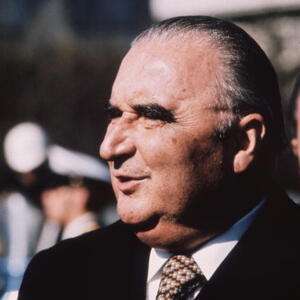