How much is Eric Holder Worth?

Eric Holder net worth and salary: Eric Holder is an American politician who has a net worth of $11.5 million dollars. Eric Himpton Holder, Jr. was born in The Bronx, New York in January 1951. Holder was a co-captain of his basketball team at Columbia University. He received a Juris Doctor from Columbia Law School in 1976. Holder worked for the NAACP Legal Defense and Educational Fund and the United States Attorney. From 1976 to 1988 he worked for the U.S. Justice Department's Public Integrity Section. He was appointed by Ronald Reagan in 1988 to serve as a judge for the Superior Court of the District of Columbia. He prosecuted Congressman Dan Rostenkowski from Illinois for corruption charges. In 1993 he stepped down and was appointed United States Attorney for the District of Columbia by President Bill Clinton. Holder became the first African American U.S. Attorney to hold that office. In 1997 he was nominated to be the Deputy Attorney General. In 2009 Holder became the 82nd Attorney General of the United States and was also the first African American to hold that post. Holder worked for Covington & Burling and was a senior legal advisor to Barack Obama. He became the first and only cabinet member of United States history to be held in contempt of Congress as a result of the Fast and Furious investigation. Holder is married to Dr. Sharon Malone and has three children. His nephew is the former NBA All-Star Jeff Malone. 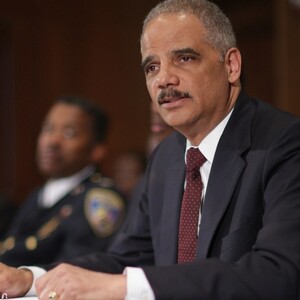