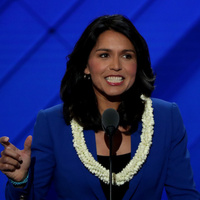 Tulsi Gabbard net worth: Tulsi Gabbard is an American politician and military veteran who has a net worth of  $500 thousand. Tulsi Gabbard was born in Leloaloa, American Samoa in April 1981. She is a Democrat who graduated from Hawaii Pacific University. Her father is Mike Gabbard and Tulsi Gabbard began serving in the United States Army in 2003 serving as a Major in the Hawaii Army National Guard. From 2002 to 2004 she served as a Member of the Hawaii House of Representatives from the 42nd district. Gabbard served as a Member of the Honolulu City Council from the 6th district from January 2011 to August 2012. From January 2013 to February 2016 she served as Vice Chair of the Democratic National Committee. Tulsi Gabbard became a Member of the U.S. House of Representatives from Hawaii's 2nd district in January 2013. She is the first Hindu member and the first Samoan American to serve in the United States Congress. She ran as a candidate for the Democratic nomination for President of the United States in 2020.