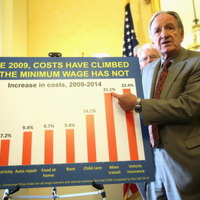 Tom Harkin Net Worth: Tom Harkin is an American politician who has a net worth of $5 million. Born Thomas Richard Harkin on November 19, 1939, in Cumming, Iowa, he currently serves as the junior United States Senator from Iowa, holding the post since 1985. A keen member of the Democratic Party, he previously had the chance to serve in the U.S. House of Representatives in the period from 1975 to 1985. Also, he spent some time in the United States Navy as an active-duty jet pilot from 1962 to 1967. As a graduate from Iowa State University and The Catholic University of America's Columbus School of Law, he immediately got back to Iowa to run against an incumbent Republican Congressman, William J. Scherle. Having lost in 1972, he went on to run again and win in 1974, serving five terms in the House since. On January 26, 2013, he shared with the world his intention to retire from the Senate after finishing his fifth term in 2015.