Tim Kaine net worth: Tim Kaine is an American politician who has a net worth of $10 million. Tim Kaine is probably best known for being Hillary Clinton's Vice Presidential running mate during the 2016 Presidential election. Prior to running for VP, Kaine served as a US Senator from Virginia. Timothy Michael Kaine was born on February 26, 1958 in Saint Paul, Minnesota. He then grew up in Overland Park, Kansas. He was raised Catholic. Tim earned a B.A. in economics from the University of Missouri in 1979. It took him just three years to earn the degree and he graduated summa cum laude. From there he attended Harvard Law School. During his time at Harvard, he took a year off to help missionaries in Honduras. After graduating from Harvard, Tim served as a law clerk then joined a number of law firms. As a lawyer, he won hundreds of millions of dollars worth of verdicts mainly trying discrimination cases. Between 1998 and 2001, Tim served as mayor of Richmond Virginia. He was elected Lieutenant governor of Virginia in 2002 and served until 2005 when he was elected governor of Virginia. He served in his position until 2010. Between 2009 and 2011 he served as the Chairman of the Democratic National Committee. He was elected to the US Senate in 2012. In 2016, Hillary Clinton selected Tim Kaine to be her Vice Presidential candidate for her Presidential election. Kaine and his wife reported $313,000 of income in 2015. 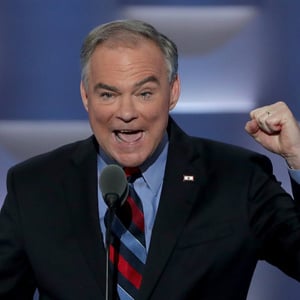