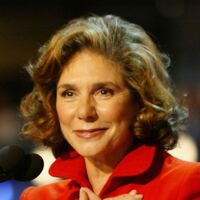 Early Life: Maria Teresa Thierstein Simões-Ferreira was born on October 5, 1938 in Lourenco Marques in the East African colony of Portuguese Mozambique. Her parents were Jose Simoes-Ferreira Jr, a Portuguese oncologist and tropical disease specialist, and Irene Thierstein, a Portuguese and British national. Her paternal grandfather was the scion of a Swiss-Germany family living on the island of Malta. In 1960, Teresa earned a Bachelor's degree in Romance Languages and Literature from the University of Witwatersrand in Johannesburg, South Africa. In 1963, she graduated from the School of Translation and Interpretation at the University of Geneva and moved to the United States to work as an interpreter at the United Nations.

Marriages and Career: Teresa Heinz Kerry married U.S. Senator Henry John Heinz, an heir to the H.J Heinz Company,  in 1966 and became a naturalized citizen five years later. She became the chair of Heinz Endowments and The Heinz Family Philanthropies, distributing money to social and environmental causes. Through the Heinz endowments, she co-founded the Alliance of Healthy Home in 1990. The program advocates for children's health. That same year, Heinz met Senator John Kerry at an Earth Day rally. This was the only time the two had met before Senator Heinz died in a plane crash on April 4, 1991.

In 1992, Teresa Heinz met John Kerry again at an Earth Summit in Rio De Janeiro, Brazil. Heinz was then a member of a State Department delegation appointed by then-President George H.W. Bush. The two began dating in 1993 and were married in May 1995. She chose to remain a registered Republican until John Kerry's 2004 presidential bid and also kept the name Heinz, saying in a statement: "My legal name is still Teresa Heinz. Teresa Heinz Kerry is my name… for politics. Just so people don't ask me questions about so and so is so and so's wife or this and that. Teresa Heinz is what I've been all my growing-up life, adult life, more than any other name. And it's the name of my boys, you know ?… So, that's my legal name and that's my office name, my Pittsburgh name."

In 1992, Heinz was a Delegate to the Earth Summit, representing Non-Governmental Organizations. In 1993, along with Kerry, she also co-founded Second Nature, which brings education sustainability to college campuses and in 1995 she founded the Heinz awards. The Heinz Awards included a category for Outstanding Contributions to the Environment. In 1995, Teresa wrote a forward for the book "Pensions in Crisis: Why the System is Failing America and How You Can Protect It." The book had support from the H. John Heinz III Foundation. Spurred by issues uncovered in the book, Heinz created the Women's Retirement Initiative. In 1996, the Heinz Foundations created WISER, the Women's Institute for a Secure Retirement.

In addition to her hard work, Heinz Kerry put $20 million, from Heinz endowments, to develop the Heinz Center in 1995, an institution dedicated to improving scientific and economic issues. Since 1996, she has hosted an annual Women's Health and the Environment conference series. She also founded the Teresa Heinz Scholars for Environmental Research, which annually awards eight $10,000 awards for doctoral dissertation support and eight $5,000 awards for Masters' thesis support for research having "public policy relevance that increases society's understanding of environmental concerns and proposed solutions." She is also a board member of the Environmental Defense Fund. For her efforts, Heinz Kerry received the Albert Schweitzer Gold Medal for Humanitarian in 2003. That same year, she was named to PoliticsPA's list of Pennsylvania's Most Politically Powerful Women. Teresa Heinz has numerous honorary doctoral degrees from institutions around the globe.

Personal Life: Teresa and Henry Heinz had three sons, Henry John Heinz IV, born in 1966, Andre Thiersten Heinz (b. 1969), and Christopher Heinz, born in 1973. It was revealed in December 2009 that she was being treated for breast cancer. She indicated that she had undergone many lumpectomies and would be receiving targeted radiation therapy treatment. In 2013, she was taken via ambulance to Nantucket Cottage Hospital after showing signs of a seizure. She was described in critical condition and was flown to Massachusetts General Hospital for further medical treatment and tests and here doctors were able to rule out a heart attack, brain tumor, stroke, and other triggers. She was released and recovered at home after outpatient treatment.

Wealth: Heinz and Kerry signed a prenup agreement and have kept their premarital assets separate. According to her most recently released tax records, in 2003, Kerry and Heinz paid a federal income tax rate of 12 percent. In addition to an ocean-front home on Nantucket, Heinz and Kerry also own a six-floor, $7 million townhouse in Boston's Beacon Hill neighborhood. They also own a $5 million ski retreat in Idaho, a $4 million estate in Pennsylvania near their home base in Pittsburgh, and a $5 million dollar home in the Georgetown neighborhood of Washington, D.C.