What was Ted Kennedy's Net Worth?

Ted Kennedy was an American politician who served as a United States Senator from Massachusetts for many years. At the time of his death in 2009, Ted Kennedy had a net worth of $100 million. According to his last Congressional financial disclosure, submitted in 2007, Ted had a net worth ranging from a minimum of $43 million and a maximum of $163 million. Ted Kennedy served as a US Senator from Massachusetts from 1962 until his death in 2009. During his lengthy tenure, one of the longest continuous Senate services in history, he was integral in the passing of such watershed laws as the Immigration and Nationality Act of 1965, the Americans with Disabilities Act of 1990, and the Mental Health Parity Act. Kennedy gained infamy in 1969 for the Chappaquiddick incident, in which he negligently drove his car off a bridge, resulting in the death of his campaign worker Mary Jo Kopechne.

Ted Kennedy was born as Edward Kennedy on February 22, 1932 in Boston, Massachusetts as the youngest of nine children of prominent wealthy couple Joseph Kennedy and Rose. His siblings were Joseph Jr., John F. Kennedy, Rosemary, Kathleen, Eunice, Patricia, Robert, and Jean. Growing up, Kennedy moved often with his socially elite family, living in places such as Bronxville, New York; Hyannis Port, Massachusetts; Palm Beach, Florida; and London, England. In the lattermost city, he began his formal education at Gibbs School. Kennedy went on to attend several other schools, including the Fessenden School and Cranwell Preparatory School, both in Massachusetts. He experienced many traumas as a youth, notably the death of his sister Rosemary via failed lobotomy, the death of his brother Joseph Jr. in World War II, and the death of his sister Kathleen in an airplane crash.

For high school, Kennedy went to Milton Academy. After graduating, he enrolled at Harvard College, where he played football. Kennedy was expelled for cheating on a Spanish exam, and was told he could apply for readmission within a year or two if he was on good behavior. Subsequently, he enlisted in the US Army, and was stationed in Europe before being discharged in early 1953. Kennedy then reenrolled at Harvard and resumed his football playing. He graduated in 1956 with a degree in history and government. Kennedy applied to Harvard Law School, but didn't get in due to his mediocre grades. He ended up going to the University of Virginia School of Law instead, graduating in 1959.

Kennedy got his start in politics in 1960 when he helped manage the successful presidential campaign of his brother John. He was to assume his brother's vacated Senate seat, but could not do so until he turned 30, in 1962. In the meantime, Kennedy became an assistant district attorney for Suffolk County, Massachusetts. When the time came for him to run for Senate, he did so and won.

Kennedy was a US Senator from Massachusetts from 1962 until 2009, one of the longest continuous services of any US Senator. Many seismic events occurred early during his tenure, most significantly the assassinations of his brother John in 1963 and his brother Robert in 1968. Additionally, he was involved in a plane crash in 1964, but survived. Throughout his lengthy tenure, Kennedy was central in the passing of many milestone laws; he and his staff wrote over 300 bills that were enacted into law. Among the most major pieces of legislation he helped pass were the Immigration and Nationality Act of 1965; the National Cancer Act of 1971; the Comprehensive Anti-Apartheid Act of 1986; the Americans with Disabilities Act of 1990; the Ryan White AIDS Care Act; the Mental Health Parity Act; and the No Child Left Behind Act. Kennedy also made many efforts to enact universal health care, which he considered the cause of his life. 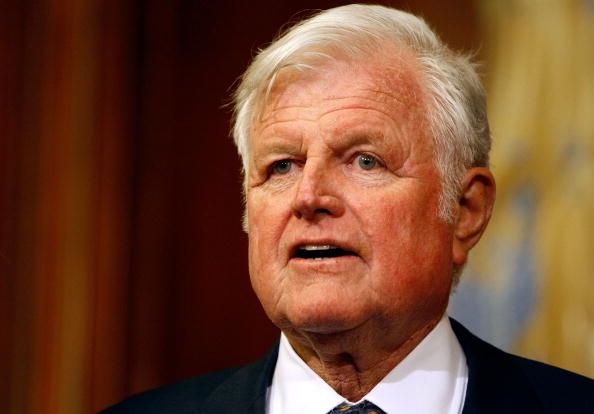 Ted Kennedy's political career was irrevocably changed by the Chappaquiddick incident in the summer of 1969, when he lost control of his car and drove it off a bridge into a tidal pond on Chappaquiddick Island in Massachusetts. His passenger, 28-year-old campaign worker Mary Jo Kopechne, was trapped inside the vehicle and drowned. Kennedy did not report the accident until the next morning, by which time authorities had already discovered the car and Kopechne's body. A week later, he pled guilty to leaving the scene of an accident, and was issued a suspended two-month jail sentence. No indictment was handed down, and Kennedy won reelection to the Senate in 1970. However, his prospects as a future presidential candidate were eroded.

Ted Kennedy married his first wife, model Joan Bennett, in 1958. They had three children named Kara, Edward Jr., and Patrick. The marriage was very troubled, mostly due to Kennedy's infidelity and Bennett's alcoholism. In 1977, the couple separated, and in 1982 amicably divorced. Kennedy went on to wed attorney and activist Victoria Reggie in 1992. She was credited with stabilizing his stormy, hedonistic public image.

In 2008, Kennedy was diagnosed with a brain tumor. He underwent surgery to remove as much of it as possible, and then began chemotherapy. Despite his poor physical state, Kennedy appeared on the first night of the 2008 Democratic National Convention in support of Barack Obama. He attended Obama's presidential inauguration early the next year, and made some other notable public appearances. Kennedy passed away in the summer of 2009 at the age of 77. His memoir, "True Compass," was published a few weeks later.