Robert Gates Net Worth: Robert Gates is a retired civil servant and university president who has a net worth of $5 million. Born Robert Michael Gates on September 25, 1943, in Wichita, Kansas, he is best known for serving as the 22nd United States Secretary of Defense from 2006 to 2011. Long before becoming leader of the Department of Defense, Gates received his higher education at the College of William and Mary (B.A., 1965) and then earned his M.A.

at Indiana University in 1966. The same year he was recruited by the Central Intelligence Agency (CIA). After leaving CIA, Gates acquired the post of president at the Texas A&M University and became a member of several corporate boards. Also, Gates was one of the members of the Iraq Study Group hat has thoroughly studied the Iraq War. Even though being the first pick to become the first Director of National Intelligence (DNI), Gates turned down the appointment to remain President of Texas A&M University. It was on November 8, 2006 that he accepted he nomination for Secretary of Defense, filling in the shoes of Donald Rumsfeld. He remained to serve as Secretary of Defense in President Barack Obama's administration, until his retirement in 2011. Robert Gates was presented with the Presidential Medal of Freedom, the nation's highest civilian award, by President Obama during his retirement ceremony. 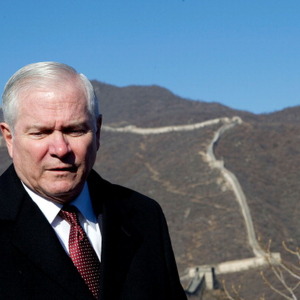