Kennedy. Robert F. Kennedy was a Democrat who graduated from Harvard University and the University of Virginia. He served in the U.S. Naval Reserve. Kennedy served as the 64th United States Attorney General from 1961 to 1964. From 1965 to 1968 he served as a United States Senator from New York. He was the seventh child of Joseph P. Kennedy Sr. and Rose Kennedy. He worked as a lawyer at the Justice Department and the managed his brother's presidential campaign. He was the chief counsel of the Senate Labor rackets Committee and publicly challenged the Teamsters President Jimmy Hoffa. Robert F. Kennedy was assassinated on June 6, 1968 at 42 years old. 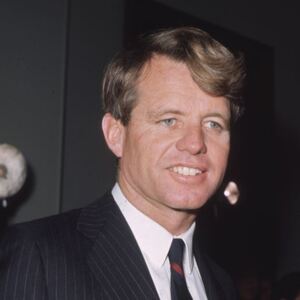