Richard Blumenthal net worth: Richard Blumenthal is an American politician who has a net worth of $85 million. He is currently the senior United States Senator from Connecticut and is a member of the Democratic Party; he also previously served as the Attorney General for the State of Connecticut. Blumenthal was born in Brooklyn on February 13, 1946 and received an undergraduate degree from Harvard College.

During his undergraduate degree, he also worked as an intern at The Washington Post in the Newspaper's London Bureau. He received his law degree from Yale Law School where he was editor-in-chief of the Yale Law Journal and attended classes with future President Bill Clinton and Secretary of State Hillary Rodham Clinton. He served in the United States Marine Corps Reserves from 1970 to 1976 and was honorably discharged at the end of his enlistment. He started his political career as an administrative assistant to US Senator Abraham Ribicoff, and at the age of 31 became a US Attorney for the District of Connecticut where he served from 1977 to 1981. He was also a chief federal prosecutor in Connecticut and his major cases included drug trafficking, organized crime, white collar crimes, civil rights violations, consumer fraud and environmental pollution. He became a US Senator in 2011 and took seats on the Senate Committees on Armed Services, Judiciary, Aging, Health, Education, Labor and Pensions. He currently lives in Greenwich, Connecticut with his wife, Cynthia Allison Malkin, and their four children. 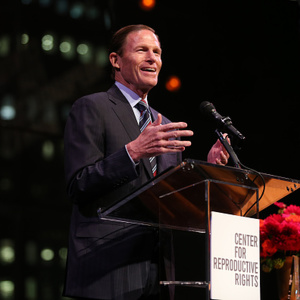