What is Rahm Emanuel's Net Worth and Salary?

Rahm Emanuel is an American politician who has a net worth of $14 million dollars. According to the last financial disclosure released by Rahm, his assets were worth between $6 and $17 million. In a given year he earns $150,00 – $500,000 from salary, dividends, speaking fees and capital gains.

Emanuel worked on the Chicago congressional campaign for David Robinson, where he earned a reputation for tenacious fundraising, and went on to hold several more political positions, including U.S. Representative and White House Chief of Staff (for President Barack Obama). Emanuel's fundraising abilities helped win him a job as Director of Finance for Bill Clinton's presidential campaign in 1992. In January 2007, the new Democratic majority elected Emanuel to serve as chair of the Democratic Caucus—the fourth-highest ranking member of House Democratic leadership. On September 30, 2010, Emanuel left his post as chief of staff to President Obama to run for Mayor of Chicago. On February 22, 2011, Emanuel was elected the 55th mayor of Chicago, and he served until May 20, 2019.

Rahm's brother Ari Emanuel is a Hollywood super-agent who serves as the co-CEO of William Morris Endeavor-IMG. Ari was the inspiration for the Jeremy Piven character Ari Gold on HBO's "Entourage".

Rahm Emanuel was born Rahm Israel Emanuel on November 29, 1959, in Chicago, Illinois. His father, Benjamin, was a pediatrician at Michael Reese Hospital, and his mother, Marsha, briefly owned a Chicago rock and roll club called the Daisy Patch. Rahm grew up in a Jewish household with older brother Ezekiel, younger brother Ari Emanuel, and younger sister Shoshana (who was adopted as a newborn after her biological mother brought her to Michael Reese Hospital, intending to give her away).

Rahm attended Bernard Zell Anshe Emet Day School, Locust Junior High School, Romona School, and New Trier High School, and he went to summer camp in Israel, along with his brothers. Rahm took ballet lessons at The Joel Hall Dance Center and Evanston School of Ballet, and though he was offered a scholarship to the Joffrey Ballet, he decided to enroll at Sarah Lawrence College instead. He served on the Sarah Lawrence Student Senate and graduated with a Bachelor of Arts in Liberal Arts in 1981. In 1985, Emanuel earned a Master of Arts in Speech and Communication from Northwestern University. As a teenager, Rahm accidentally cut the middle finger of his right hand on a meat slicer; it got infected after he went swimming in Lake Michigan, resulting in the partial amputation of his finger.

Emanuel's political career began with Illinois Public Action, a consumer rights and public interest organization. In 1984, he worked for Democrat Paul Simon during his Senate campaign, and four years later, he was the Democratic Congressional Campaign Committee's national campaign director. In 1989, Rahm worked on Richard M. Daley's Chicago mayoral campaign as chief fund-raiser and senior advisor. He then joined Bill Clinton's presidential primary campaign as the director of the finance committee, helping Clinton raise $72 million. From 1993 to 1998, Emanuel served as one of Clinton's senior advisors at the White House; he started out as Assistant to the President for Political Affairs, then became Senior Advisor to the President for Policy and Strategy.

Rahm was on paid retainer at investment bank Goldman Sachs while he was working on Clinton's presidential campaign, and in 1998, he resigned from the Clinton administration and began working at a different investment bank, Wasserstein Perella. In 2000, President Clinton named Emanuel to Freddie Mac's Board of Directors, but he resigned from the board the following year to focus on running for Congress. Rahm defeated Republican Mark Augusti and began serving in the U.S. House of Representatives on January 3, 2003. He was soon named to the House Financial Services Committee, and became the chairman of the Democratic Congressional Campaign Committee chairman after Bob Matsui passed away in early 2005. Emanuel kept the position until January 2007, then served as Chair of the House Democratic Caucus from January 3, 2007, to January 2, 2009, which was his last day as a congressman.

Rahm was named White House Chief of Staff for the Obama administration on November 6, 2008, and he served from January 20, 2009, to October 1, 2010. A 2009 article in "The New York Times" called Emanuel "perhaps the most influential chief of staff of a generation." Rahm initially opposed Obama's plan for the Affordable Care Act and suggested a smaller health care plan, but he later said that he was glad Obama didn't listen to him. Emanuel left his position as Chief of Staff in September 2010 and entered Chicago's mayoral race. 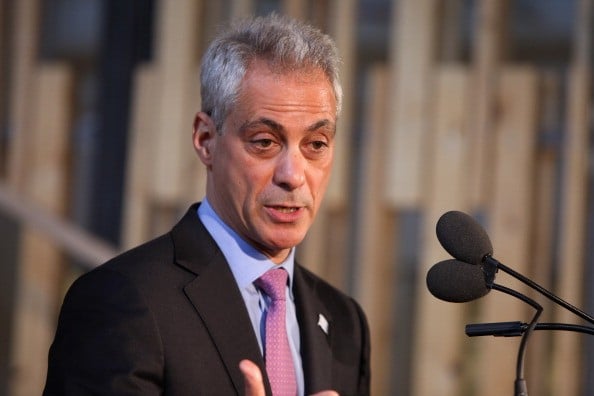 Since Emanuel did not live in Chicago for one year prior to the mayoral election, his eligibility was challenged, but the Cook County Circuit Court and Board of Elections affirmed that he was eligible to run for the position. A court of appeals reversed the Circuit Court's decision in January 2011, but the Illinois Supreme Court later affirmed Rahm's eligibility. On February 22, 2011, Emanuel won the election with 55% of the vote, and he was sworn in at the Pritzker Pavilion on May 16th, becoming the city's first Jewish mayor. Rahm was re-elected in 2015, and though he announced that he would run for re-election in 2019, he later changed his mind, saying that it was time to "write the next chapter." In April 2018, NUI Galway in Galway, Ireland (Chicago's sister city), presented Emanuel with an honorary Doctor of Laws degree due to his commitment to education while serving as Mayor. Since leaving the position, Rahm has worked as a senior counselor at Centerview Partners and a contributor at "ABC News." He is also a founding executive chair of the Becoming A Man youth program's National BAM Advisory Council.

Rahm married Amy Merritt Rule in 1994, and they have two daughters, Ilana and Leah, and a son, Zachariah. Emanuel is a member of the Anshe Sholom B'nai Israel synagogue in Chicago, and every year he takes his family on a trip with the purpose of exposing his children to other cultures. Rahm has participated in several triathlons, and in a 2011 event, he came in at #9 in his age group.

In 1998, Rahm and Amy paid $695,000 for a 2,700 square foot home in the Ravenswood neighborhood of Chicago. The couple rented the 4-bedroom house out while Emanuel was working in Washington, D.C., but they moved back into the home in 2011.