Mark Kelly net worth: Mark Kelly is an American astronaut, engineer, and U.S. Navy captain who has a net worth of $20 million. According to his 2019 financial disclosure, Mark and his Gabby Giffords have a combined net worth of between $10 and $30 million. Interestingly, according to Gabby's 2011 financial disclosure, she and Mark were worth just $2 million at that point. The family's fortunes increased as Mark became a highly-sought-after and highly-paid public speaker. They also earned money from book deals, business consulting and corporate board memberships. Since January 2019 Mark earned as much as $8 million. He earned $1.9 million from 64 paid speeches since January 2018.

Mark Kelly was born in Orange, New Jersey in February 1964. He came from humble beginnings, the son of two police officers. He spent 25 years as a Naval fighter pilot and space shuttle astronaut.

Kelly was a naval aviator and flew in combat missions in the Gulf War. In 1996 he was selected to be a NASA Space Shuttle pilot and his first mission was as pilot of STS-108 in 2001. He also piloted STS-21 in 2006. Kelly commanded STS-124 in 2008 as well as STS-134 in 2011. His final mission was also the final mission of Space Shuttle Endeavour, STS-134. He has an identical twin Scott Kelly who is also an astronaut and the pair became the only siblings to both travel in space. In 2015 he spent a year on the International Space Station and was part of a study with his brother to find out how physical differences caused by living in space compared to those from living on Earth. Mark Kelly launched his campaign for 2020 United States Senate as a Democrat. He was eventually successful in the campaign. 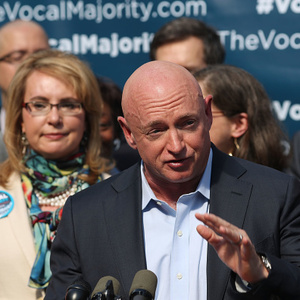