What was Madeleine Albright's Net Worth?

Albright was born on May 15, 1937 in Prague, Czehoslovakia and given the name Marie Jane Korbelova. She is the daughter of Czech diplomat, Josef Korbel, and mother Anna Korbel. She has a younger sister and brother – Katherine and John. Her parents converted from Judaism to Catholicism in 1941 and raised their children in a Roman Catholic home. The family moved to Britain for her father's job and they lived in London during World War II, enduring some of the worst of the Blitz. The family eventually emigrated from the UK to the U.S. in 1948. Albright's father was able to obtain a position as a professor of political science at the University of Denver, later becoming the school's dean of international relations.

Albright spent her teens in Denver and graduated from Kent Denver School before attending Wellesley College in Wellesley, Massachusetts. While there, she became a naturalized United States citizen in 1957. She graduated with her bachelor's degree in political science in 1959.

While at home one summer from college, Albright met Joseph Medill Patterson Albright while interning at "The Denver Post." The couple began dating and then married shortly after her graduation from Wellesley. The couple then moved to Chicago shortly after where Albright worked as an editor for "Encyclopaedia Britannica" before they then moved to New York City, where her husband began working for "Newsday." A year later, they moved to Washington, DC, where Albright began studying international relations and Russian at the Paul H. Nitze School of Advanced International Studies at Johns Hopkins University. She continued her studies at Columbia University when the couple moved back to New York City the following year. She ultimately earned a certificate in Russian, and an M.A. and Ph.D. in 1975 from Columbia.

Throughout the moves back and forth from Washington D.C. to New York, Albright became involved with fundraising from the 1972 presidential campaign of U.S. Senator Ed Muskie of Maine. She became his chief legislative assistant in 1976. She was then recruited to work in the West Wing as the National Security Council's congressional liaison by a former professor when he was named the National Security Advisor for the Carter Administration.

When Carter lost the 1980 election, Albright took at job at the Woodrow Wilson International Center for Scholars at the Smithsonian Institution in Washington, D.C., where she began working on a research project about Poland's solidarity movement. She joined the academic staff at Georgetown University in 1982 where she taught courses in Eastern European studies and directed the school's program in women in global politics. During this time, she also maintained her connections to politics and was employed by the National Security Council in 1992 to handle the transition to a new administration following President Bill Clinton's win. In January of 1993, she was nominated to be the U.S. Ambassador to the United Nations. 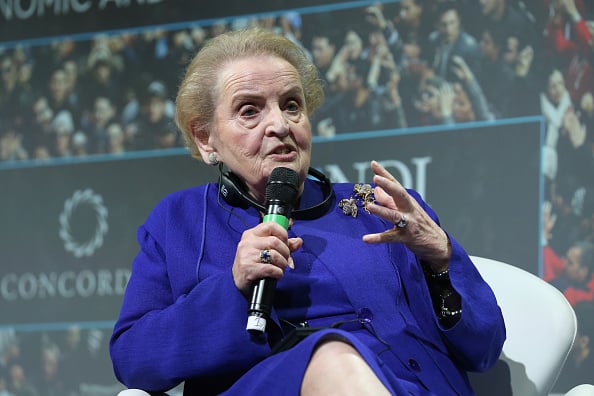 Albright's time as Ambassador was characterized in large part by the rocky relationship she had with then U.N. Secretary-General, Boutros Boutros-Ghali and the mishandled Rwandan Genocide, which Albright has subsequently described as one of her deepest regrets. In 1996, Albright helped in the overthrow of  Boutros-Ghali and the instatement of Kofi Annan.

Albright became the 64th U.S. Secretary of State in 1997, becoming the first female Secretary of State ever and the highest-ranking women in the history of U.S. government at the time. She was a key player in developing the American foreign policy in Bosnia and Herzegovina and the Middle East. She also represented the United States at the transfer of sovereignty over Hong Kong. She also played a role in the U.S. position towards Iraq and the placement of sanctions on Iraq until they agreed to destroy their weapons of mass destruction. Her tenure as Secretary of State ended on January 20, 2001.

She then founded the Albright Group, an international consulting firm. In 2005, she accepted a position on the Board of Directors of the New York Stock Exchange. She has continued accepting positions on various boards and institutions related to politics and leadership.

After her marriage to Joseph Albright in 1959, the couple had three daughters together before ultimately divorcing in 1982. At the time of her marriage, she had converted to the Episcopal Church. Albright only learned of her parents' Jewish history, which they had kept secret from their children following their conversion to Catholicism, following a report by "The Washington Post." She later learned that three of her grandparents had been murdered in the Holocaust.

Albright has published a number of books, including a memoir entitled "Madam Secretary" that was published in 2003. Her other books include "The Mighty and the Almighty: Reflections on America, God, and World Affairs," "Read My Pins," "Prague Winter: A Personal Story of Remembrance and War," and "Fascism: A Warning."

In addition to the degrees she earned, she also holds a number of honorary degrees from Brandeis University, Smith College, the University of North Carolina, and Tufts University. She was inducted into the National Women's Hall of Fame in 1998. 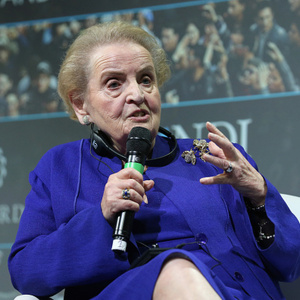