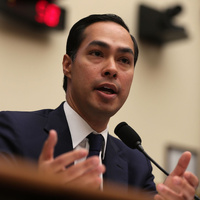 Julian Castro net worth: Julian Castro is an American politician who has a net worth of $700 thousand. Julian Castro was born in San Antonio, Texas in September 1974. He is a Democrat who graduated from Stanford University and earned his JD from Harvard University. Castro served as a member of the San Antonio City Council from the 7th district from July 2001 to July 2005. He was the Mayor San Antonio from June 2009 to July 2014. Castro served as the 16th United States Secretary of Housing and Urban Development under President Barack Obama from July 2014 to January 2017. His twin brother is Congressman Joaquin Castro. Julian Castro was considered a potential running mate for Hillary Clinton in her 2016 presidential campaign. In January 2019 he launched his campaign for the Democratic nomination for the 2020 election for President of the United States. If elected he would become the third youngest President. According to his 2014 Congressional finance disclosure, Julian's net worth was $587,000. He earned $100-250,000 from an book advance and has around $100,000 in his cash/checking accounts.