John Lewis net worth and salary: John Lewis was an American politician and civil rights leader who had a net worth of $300 thousand at the time of his death in 2020. According to this last Congressional wealth disclosure, Lewis estimated his net worth to be $150 – $300,000.

John Lewis was born in Troy, Alabama in February 1940. He was a Democrat who graduated from American Baptist College and Fisk University. Lewis served as the 3rd Chairman of the Student Nonviolent Coordinating Committee from 1963 to 1966. As chairman of the SNCC he was one of six leaders to organize the March on Washington in 1963. During this period he marched arm-in-arm with Dr. Martin Luther King, Jr. and was arrested on a number of occasions protesting discriminatory laws.

In 1987 he was elected to the U.S. House of Representatives to represent Georgia's 5th district. He was the dean of the Georgia congressional delegation and his district included three quarters of Atlanta. He served as Chief Deputy Whip of the House for a time, starting in 1991 and as Senior Chief Deputy Whip  starting in 2003. Lewis was awarded the Presidential Medal of Freedom by President Barack Obama in 2011 and the United States Navy announced in 2016 that they would name a replenishment oiler after him. 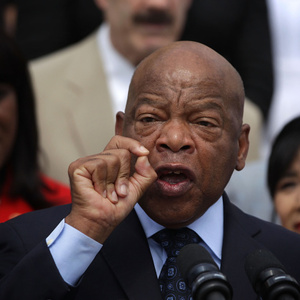