John Delaney net worth and salary: John Delaney is an American politician and businessman who has a net worth of $230 million. John Delaney was born on April 16, 1963 in Wood-Ridge, New Jersey. He attended Bergen Catholic High School. He then earned a B.A. from Columbia University followed by a J.D. from Georgetown Law. Delaney founded two New York Stock Exchange-listed companies before the age of 40. In 1993, he co-founded Health Care Financial Partners, which makes loans available to smaller heath care service providers, and in 2000 he co-founded Capital Source, a commercial lending company. He is also a member of the Board of Directors for several organizations, including: St. Patrick's Episcopal Day School, Georgetown University, the National Symphony Orchestra, and the International Center for Research on Women.

John and his wife, April, have four daughters and live in Montgomery County. April is the Director for Common Sense Media in Washington, DC.

In July 2018 Delaney announced his candidacy for president for the 2020 election. He did not run for re-election to Congress in 2018 so he could focus entirely on his Presidential campaign. 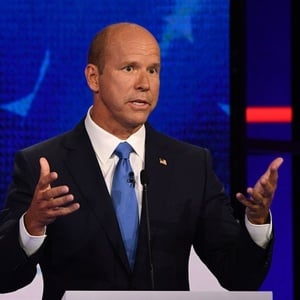