What is Jimmy Carter's net worth?

Jimmy Carter is an American politician and philanthropist who has a net worth of $10 million. Jimmy Carter is a former naval officer, former Governor of Georgia and former President of the United States, having served as the 39th President from 1977 to 1981. Prior to entering politics, Jimmy ran a successful peanut farm.

James Earl Carter Jr. was born in Plains, Georgia on October 1, 1924. The family moved around several times when Carter was an infant. His father was an investor in farmland and his mother was a registered nurse. The family eventually settled in Archery and had three more children: Gloria, Ruth, and Billy. Jimmy was educated in the public school system, attending Plains High School at the height of the Great Depression and graduating in 1941. He attended Georgia Southwestern College for one year then transferred to the Georgia Institute of Technology. He then transferred to the Naval Academy where he graduated with a Bachelor of Science degree in 1946. During his time at the Academy, Jimmy met and fell in love with his sister's best friend Rosalynn Smith. Jimmy and Rosalynn were married soon after his graduation.

Between 1946 to 1953, Jimmy and Rosalynn lived in Hawaii, Virginia, New York, California and Connecticut as part of his Naval deployments. During his time in the Navy, Jimmy worked in the nuclear submarine program. He began officers' training for submarine duty in 1948 and served aboard the USS Pomfret and was subsequently promoted to lieutenant junior in 1949. In 1952, an accident with the experimental NRX reactor at the Atomic Energy of Canada's Chalk River Laboratories caused millions of liters of radioactive water to flood the reactor's building basement. Carter was ordered to Chalk River to lead a maintenance crew to assist in the shutdown of the reactor. The process was painstaking and tedious and required each member to don protective gear in order to prevent exposure to radioactivity. Carter has said that his experience at Chalk River shaped his views as president on atomic energy and led him to cease the development of a neutron bomb. When his father died in 1953, he resigned his naval commission and moved back to Georgia to be with his family. Carter was awarded many honors for his time in the Navy, receiving the American Campaign Medal, the World War II Victory Medal, China Service Medal, and the National Defense Service Medal.

Back in Georgia, Rosalynn was finding it difficult to settle back into small-town life, having enjoyed settling down in New York. Jimmy took over the Carter farms and operated Carter's Warehouse, a general-purpose seed and farm supply company in Plains. He quickly became a leader in the community and caught the political bug. In 1962 was elected to the Georgia Senate. Carter was then elected Governor of Georgia, a position he held from 1971 to 1975. In his inaugural speech, he declared: "the time of racial discrimination is over. … No poor, rural, weak, or black person should ever have to bear the additional burden of being deprived of the opportunity for an education, a job or simple justice." The message, against a backdrop of a southern state that was still thickly racist, was unexpected and shocked the crowd. Carter went on to fervently prioritize civil rights throughout his term as Governor.

On December 12, 1974, he announced his candidacy for President. He won his party's nomination at the 1976 Democratic National Convention. Going into the primaries, he was considered to have no chance at winning against better-known politicians. His name recognition was only two percent. However, as the Watergate scandal of President Nixon was heating up, Carter's position as a distant outsider from Washington D.C. became his leading asset. Carter became the front-runner early on by winning the Iowa caucuses and the New Hampshire primary. His strategy was two-pronged: In the south, Carter was seen as one of their own–a moderate favorite "son"–and in the north, he appealed to conservative Christians and rural voters. Carter chose Walter Mondale as his running mate and faced off against opponent Gerald Ford in three televised debates.

Jimmy Carter was elected President on November 2, 1976. He won the popular vote by 2 percentage points, and received 297 electoral votes to Ford's 240. Carter was sworn in as president on January 20, 1977. On his second day in office, Carter issued Proclamation 4483, which pardoned all Vietnam War draft dodgers. 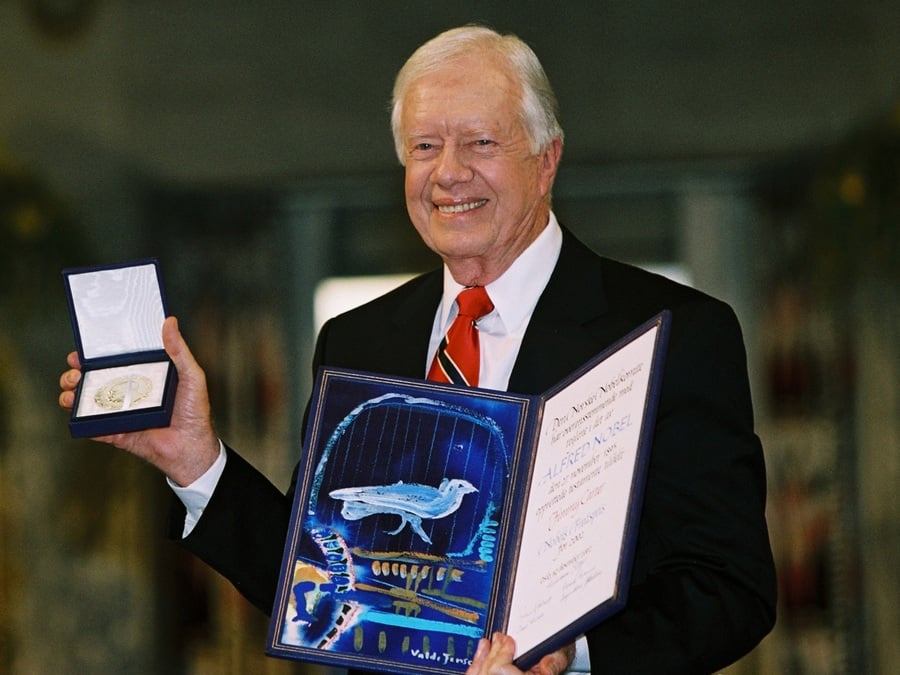 Significant foreign policy accomplishments during his administration include the Panama Canal treaties, the Camp David Accords, the treaty of peace between Egypt and Israel, the SALT II treaty with the Soviet Union, and the establishment of US diplomatic relations with China. Carter also established the Department of Energy and the Department of Education during his term. He championed human rights all over the world, and was a staunch supporter of a comprehensive energy program and major environmental protection legislation. The end of his presidential tenure was rocked by the 1979-1981 Iran hostage crisis, the 1979 energy cruises, the Three Mile Island nuclear accident, and the Soviet invasion of Afghanistan. Carter embraced the idea of a universal health care system for everyone in the country, but was ultimately thwarted at each try.

After losing his re-election campaign in a landslide to Ronald Reagan, in 1982, he became a University Distinguished Professor at Emory University in Atlanta. He also founded the Carter Center, an organization that works to resolve conflict, promote democracy, protect human rights, and prevent disease across the globe. Carter serves as an honorary chair for the World Justice Project as of 2019.

Carter has become notable for his dedication to the charity Habitat for Humanity. He has also written more than 30 books during his life, on a variety of topics.

Carter's presidency was not remembered in history by most as being particularly successful, however, he became well-known for his activism, philanthropy, and long-term teaching career post-presidency.

When he was President, Jimmy earned the then-standard $200,000 per year in salary. Thanks to inflation, this is the same as $1.4 million in today's dollars. Current Presidents earn $400,000. As a former President he earns an annual pension of $207,800. He also has a full-staff of Secret Service protection and is paid $150,000 per year for staff.

Jimmy and Rosalynn have three sons and one daughter. As of this writing, their children have produced eight grandsons, three granddaughters and two great-grandsons. On October 1, 2019, Carter became the first living president to reach the age of 95. 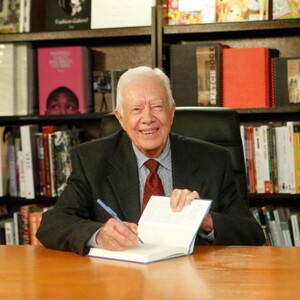