Jerry Brown net worth: Jerry Brown is an American politician who has a net worth of $10 million dollars. Jerry Brown, aka Edmund Gerald Brown, Jr. was born in San Francisco, California in April 1938. Brown served as Governor of California from 2011 to January 2019. He graduated with a Juris Doctor from Yale Law School in 1964.

Brown was a member of the Los Angeles Community College District Board of Trustees from 1969 to 1971. He became Secretary of State of California in 1971 and held office until 1975. In 1975 he became California's 34th Governor and held the office until 1983. From 1989 to 1991 he was the chairman of the California Democratic Party. He was the Mayor of Oakland, California from 1999 to 2007 and the Attorney General of California from 2007 to 2011. In 1976, 1980, and 1992 Brown sought the Democratic nominations to be President of the United States. In 1982 he was unsuccessful as the Democratic candidate for United States Senate. His father Pat Brown was the 32nd Governor of California. His two terms as Governor make him California's longest serving governor. He also holds the distinctions of being the oldest California governor, and at one time was the sixth-youngest. In 1990 Jerry Brown married Anne Gust, the former chief administrative officer for The Gap. 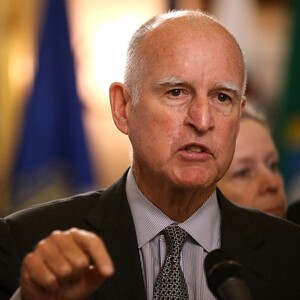