Jay Rockefeller net worth: Jay Rockefeller is an American politician and socialite who has a net worth of $160 million. John Davison Rockefeller IV, better known as Jay, was born in June of 1937. Aside from being born into the notable Rockefeller family (he is the great grandson of John D. Rockefeller, the late oil tycoon), he is best known for being a governor and senior Senator from West Virginia.

He was first elected in 1984 and served as the governor of West Virginia from 1977 until 1985. After being born into a family of notable political figures, Rockefeller is now the only member who is still serving. There have been six generations of politicians in the family, though he announced in early 2013 that he would not run again for the 2014 term. It's also worth noting that Rockefeller is the only member of the Rockefellers to hold office as a democrat. In 1967, Rockefeller married Sharon Lee Percy, who is the CEO of WETA-TV, which is Washington, D.C.'s leading PBS station. Together they have four children, John Davison "Jamie" Rockefeller V, who was born in 1969, Valerie, Charles, and Justin Aldrich Rockefeller, who was born in 1979. 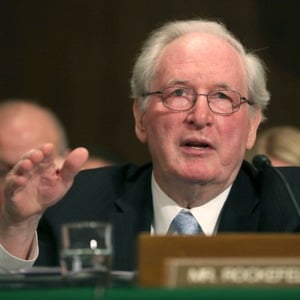