Jay Carney Net Worth and Salary: Jay Carney is an American former White House Press Secretary who has a net worth of $10 million. He is best known for being the 29th White House Press Secretary and for being the Vice President of global corporate affairs at Amazon, a position he started in 2015. He was the second person to serve in the position during the presidency of Barack Obama, having replaced Robert Gibbs. Prior to his appointment as Press Secretary, he was director of communications for Vice President Joe Biden. Carney previously served as Washington Bureau Chief for Time magazine (2005-08) and as a regular contributor in the "roundtable" segment of ABC News' This Week with George Stephanopoulos. President Obama announced he had accepted Carney's resignation as Press Secretary on May 30, 2014.

Jay Carney was born May 22, 1965 in Washington, D.C.  Earlier in his career, after being hired as a reporter for The Miami Herald in 1987, Carney joined Time magazine as its Miami Bureau Chief in 1989. Carney worked as a correspondent in Time's Moscow Bureau for three years, covering the collapse of the U.S.S.R. then came to Washington in 1993 to report on the Bill Clinton White House. He has written and reported about the presidency of George W. Bush, and was one of a handful of reporters who were aboard Air Force One with President Bush on September 11, 2001, the day of the terrorist attacks on the United States. Carney later won the 2003 Gerald R. Ford Prize for Distinguished Reporting on the Presidency. Jay Carney was Time's Washington Bureau Deputy Chief from 2003 to 2005. He was assigned to the magazine's Washington Bureau during his subsequent tenure as Bureau Chief while also writing about politics and national affairs. Carney also worked for CNN (another TIME Warner division) as a special correspondent. On December 15, 2008, Carney went from the private sector to public service as Director of Communications to Vice President Joe Biden. On January 27, 2011, Carney was selected to become the Obama administration's second White House Press Secretary and was succeeded by Josh Earnest in May 30, 2014. 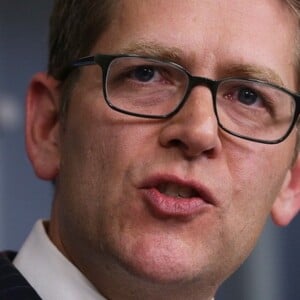