What is James Carville's Net Worth?

James Carville is a political consultant and author who has a net worth of $10 million. That is a combined net worth with his wife, political strategist Mary Matalin. James Carville has been a strategist for candidates for public office in the United States and abroad. He achieved national recognition for his work as the lead strategist for Bill Clinton's presidential campaign in 1992. Beyond his political work, Carville often appears on cable news shows and podcasts to share his expertise.

James Carville was born as Chester James Carville Jr. on October 25, 1944 in Fort Benning, Georgia. He is the oldest of eight children of James, who was stationed in Fort Benning during World War II, and Lucille, a former school teacher who stayed in Carville, Louisiana. As a young adult, Carville went to Ascension Catholic High School in Donaldsonville, and then enrolled at Louisiana State University. He didn't graduate at the time, as his poor grades caused the school to throw him out. Subsequently, Carville served two years in the US Marine Corps, with which he was stationed at Camp Pendleton in San Diego. Following the end of his enlistment, he returned to finish his studies at LSU, eventually obtaining his BS degree in general studies, and later a JD in 1973. Carville went on to work as a lawyer at McKernnan, Beychok, Screen and Pierson in Baton Rouge. He also worked for the political consulting firm Weill-Strother.

Political Consulting in the 80s

Political Consulting in the 90s

In 1992 and early 1993, Carville assisted San Fernando Valley state assemblyman Richard Katz in his run for the Los Angeles mayoral election. Despite spending millions on television commercials, Katz finished in fourth place and failed to advance to the general election. 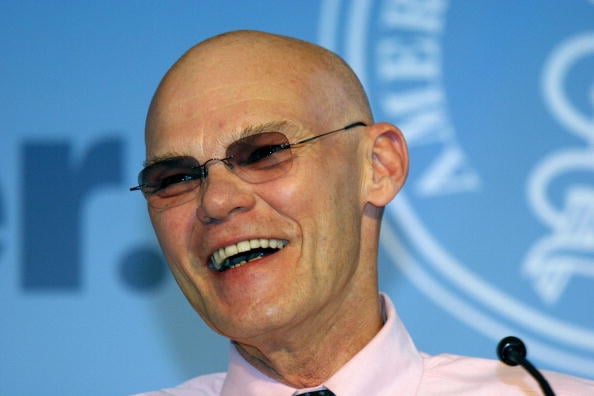 Arguably Carville's greatest political victory was in 1992, when he helped Arkansas governor Bill Clinton defeat the incumbent George H. W. Bush in the presidential election. His campaign theme was characterized by angry left-wing populism, with a focus on change, the economy, and healthcare. Following the successful election in 1993, Carville was honored as Campaign District Manager of the Year by the American Association of Political Consultants. The same year, his role in Clinton's campaign was documented in the Oscar-nominated film "The War Room."

While consulting internationally, Carville also continued to work with presidential candidates in the US. In 2004, he became an informal advisor to John Kerry's presidential campaign, and four years later, advised Hillary Clinton during her presidential run. For the 2020 presidential race, Carville endorsed Colorado Senator Michael Bennett's ultimately losing campaign for the Democratic nomination.

From 2002 to 2005, Carville cohosted the CNN current events debate program "Crossfire" with Paul Begala. Carville continued to be a regular CNN contributor through 2013, after which point he joined Fox News Channel. In 2006, he switched his focus to sports and began hosting the radio show "60/20 Sports" with Luke Russert.

In addition to serving as a host and contributor on news programs, Carville has appeared in numerous television and print advertisements. He has been in commercials for such major consumer brands as Heineken, American Express, Maker's Mark, Coca-Cola, Nike, and Ariba. Carville has also made appearances in many films, including "The People vs. Larry Flynt," "Old School," "G.I. Joe: Retaliation," and "The Assassination of Jesse James by the Coward Robert Ford," as well as on television shows such as "Mad About You," "Spin City," and "30 Rock."

In 1993, Carville married fellow political consultant Mary Matalin, who had worked on the losing reelection campaign of George H. W. Bush. The couple has two daughters, and lives in Virginia.