Jacqueline Kennedy Onassis net worth: Jacqueline Lee (Bouvier) Kennedy Onassis, also known as Jackie Kennedy, was an American First Lady and philanthropist who had a net worth of $150 million at the time of her death in 1994. That's the same as around $270 million in today's dollars. She was the widow of John F. Kennedy, the 35th President of the United States. She was the First Lady of the United States from 1961 until JFK's assassination in 1963.

Early Life: Jacqueline Lee Bouvier was born in Southampton, New York on July 28, 1929. Her parents were well-off thanks to an inheritance received by her father, John Vernou "Black Jack" Bouvier. "Black Jack" was also a high-earning stock broker on Wall Street. Unfortunately "Black Jack" gambled and drank away the family fortune, leading to her parent's divorce.

After her parents divorced, Jackie and her sister Caroline, who later in life would be known as Lee Radziwill, divided their time between Virginia, Rhode Island, and New York. In 1994 Lee's son Anthony married Carole Ann DeFalco, better known today as Carole Radziwill, one of the cast members Real Housewives of New York.

From a very young age, Jackie had a love for horses and wanted to become an equestrienne. During the Great Depression, she attended the Chapin School in New York from first-sixth grade. In 1951, Bouvier graduated from The George Washington University in Washington, D.C., with a Bachelor of Arts degree in French literature. In the summer of 1951, she went on a trip through Europe with her sister, Caroline. Following the trip, they wrote a book titled "One Special Summer", which contained Jackie's own drawings.

Marriage to JFK: Jackie and John F. Kennedy had long-run in similar social circles. They were formally introduced at a dinner party in 1952.

On September 12, 1953 they married at St. Mary's Church in Newport, Rhode Island. They honeymooned in Acapulco, Mexico.

In 1957, she gave birth to Caroline Bouvier. John announced his candidacy for Presidency on January 3, 1960 and was elected on November 8th, making Jackie the third-youngest First Lady ever, at age 31. About two weeks after the election, Jackie gave birth to John F. Kennedy Jr.

As First Lady, she is most noted for planning White House social events, her fashion sense, restoring the inside of the White House, and her popularity among international dignitaries. In early 1963, she gave birth to Patrick Bouvier Kennedy, who was born five weeks prematurely and died two days after birth.

Tragically, on November 21, 1963 her husband John F. Kennedy was assassinate, leaving her a widow and single mother of two children.

After JFK: Upon her husband's death, Jackie became the beneficiary of a Kennedy family trust that provided around $200,000 in annual income. That's the same as around $1.7 million in today's dollars. A stipulation of the trust stated that if she were to remarry, the income would be transferred to their two children.

Aristotle Onassis: On October 20, 1968, Jackie married Greek shipping tycoon Aristotle Onassis. At the time Aristotle owned the world's largest shipping fleet. He was one of the richest people in the world with a fortune estimated at $500 million in the late 1960s. That's the same as being worth $3.8 billion in today's dollars.

To protect herself from losing the Kennedy trust income, Jackie insisted Aristotle pay her $3 million before they married. She also requested and received a trust from Onassis that would pay $150,000 per year for life.

During their marriage, Jackie received lavish gifts from her new husband, including a 40-carat diamond ring on her 40th birthday that cost $1 million ($7.5 million in today's dollars).

The couple maintained six global residences including a 15-room apartment on Fifth Avenue in Manhattan, an apartment in Paris and the Greek private island of Skorpios which he owned outright.

The marriage began to fall apart in 1973 around the time he was diagnosed with a fatal illness. Aristotle grew concerned that Jackie would be entitled to half of his estate upon his death. He was so concerned that he reportedly lobbied for a change in Greek law that drastically limited the amount of money a foreign spouse could receive from a divorce or death.

Aristotle died on March 15, 1975. Jackie and his daughter Christina were soon locked in a bitter dispute of the estate. In the end Jackie accepted a $26 million lump sum settlement. That's the same as around $120 million in today's dollars. With her other real estate and personal assets, Jackie was instantly one of the richest women in America.

Estate: Knowing that her two children were extremely wealthy thanks to separate Kennedy family trusts, Jackie left each of them a relatively-paltry $250,000. JFK Jr and Caroline also inherited several real estate properties, including the 15-room NYC apartment and a home on Martha's Vineyard. In 2003, four years after JFK Jr's death, Caroline sold the NYC apartment for $30 million.

Jackie's will gave $500,000 to each of her sister's children and established trusts that benefited a charitable foundation she created called the C&J Foundation (named after her children).

In April 1996 JFK Jr and Caroline conducted an auction of their mother's personal possessions. In the end, nearly 6,000 items were sold for a total of $34.5 million. The highest-priced item sold at auction, at $2.6 million, was the diamond engagement ring given to her by Aristotle. 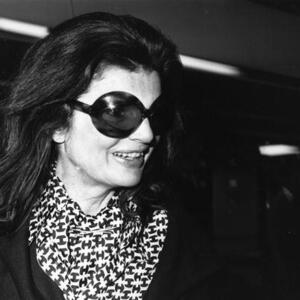