Harold Ford Jr Net Worth: Harold Ford, Jr. is an American politician who has a net worth of $3 million dollars. Born in 1970 in Memphis, Tennessee, Harold Ford, Jr. grew up in a family of politicians. His father was former Congressman Harold Ford, Sr., and the family was well known in their Memphis community. Ford graduated with an American history degree from the University of Pennsylvania and went to work as a staff aide in the Senate Budget Committee. A year later, he accepted a position in the United States Department of Commerce. Ford attended the University of Michigan Law School, graduating with his J.D. in 1996. That year, his father decided not to run for a 12th term in Congress and Ford threw his name in the ring. He quickly became the Democratic Party favorite and was elected when he was 26 years old. Ford has been reelected four times and delivered the keynote address at the Democratic National Convention in 2000. He lost his 2002 attempt to unseat Nancy Pelosi as House Democratic Leader. Ford sat on the House Budget Committee and the House Committee on Financial Services. He lost his bid for the Senate in Tennessee in 2006 to Republican Bob Corker. He began teaching at Vanderbilt University, the University of Texas at Austin and New York University, and working for Morgan Stanley. His voting history includes votes in favor of the Gramm-Leach-Bliley Act, which some say sparked the economic crisis, and invading Iraq. He supported the Federal Marriage Act defining marriage as a union between a man and woman and identifies himself as pro-life. Ford favors universal healthcare coverage, embryonic stem cell research and reforming drug policy. He and his wife, Emily Threlkeld, have been married since 2008. 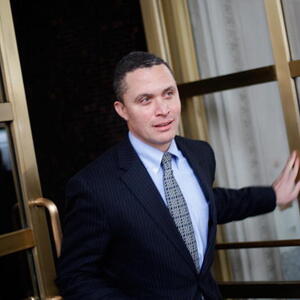