Geraldine Ferraro Net Worth: Geraldine Ferraro was an American attorney, politician and US Congress member who had a net worth of $4 million. As a Democratic Party politician and member of the US House of Representatives, she is best remembered for becoming the first female vice presidential candidate representing a major American political party. Geraldine Anne Ferraro (August 26, 1935 – March 26, 2011) was born and grew up in New York City. She made her career beginnings as a public school teacher before training as a lawyer. In 1974 she took part of the Queens County District Attorney's Office, where she headed the new Special Victims Bureau. After four years of uncovering sex crimes, child abuse, and domestic violence at the Bureau, she was elected to the House in 1978. Wholeheartedly devoted to her work, Geraldine Ferraro quickly rose in the party hierarchy while heading towards equity for women in the areas of wages, pensions and retirement plans. Thus, she became a symbol of the feminist movement in the States, as well as a fierce opponent to President Ronald Reagan. When Ferarro was selected to be a running mate of the former vice president and presidential candidate Walter Mondale in 1984, she actually became the first female vice president nominee. However, the general election ended with Mondale and Ferraro being defeated in a landslide by incumbent President Ronald Reagan and Vice President George H. W. Bush. Subsequently, she went on to run for a seat in the US Senate from New York in 1992 and 1998, both times losing in the primary election. In the meantime, she also served as an alternate delegate to the World Conference on Human Rights in 1993. Geraldine Anne Ferraro died at the age of 75, on March 26th 2011, twelve years after being diagnosed with multiple myeloma. 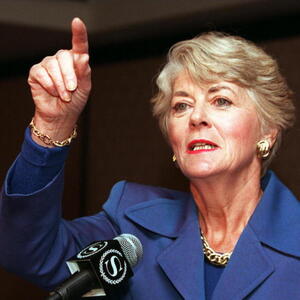