Eric Garcetti net worth and salary: Eric Garcetti is an American politician who has a net worth of $3 million. He is best known for being the mayor of Los Angeles.

Eric Garcetti was born in Los Angeles, California in February 1971. He was raised in the LA suburb of Encino. His father Gil Garcetti served as LA's District Attorney between 1992 and 2000, famously including the time when O.J. Simpson was unsuccessfully prosecuted for murder.

In July 2013 he became the 42nd Mayor of Los Angeles. He was reelected in 2017. Garcetti became the city's first elected Jewish mayor as well as its youngest mayor in history and the Los Angeles's second consecutive Mexican American mayor.

Real Estate Holdings and Investments: On his 2017 financial disclosure Eric disclosed ownership stakes worth between $10,000 and $100,000 in four companies including public stock of Starbucks and Ross Stores Inc. He also listed several current and former real estate investments, three of which were worth $100,000 – $1 million.

One of those assets is a commercial real estate property in Beverly Hills acquired several decades ago by Garcetti's grandfather. In 1998 an oil company called Venoco Inc. signed a 20-year lease to drill for oil under the property which is located not far from Beverly Hills High School, where Venoco owns additional drills. According to a 2013 financial filing, Venoco was at that time paying the Garcetti family a nominal $1.25 per year for the drilling rights because at that point it had not yet begun drilling. The terms of the lease promised the partnership a cut of future oil profits generated by slant-drilling from their machines already located at Beverly Hills High. Facing mounting pressure over his environmental record, in 2013 Eric cut ties with the oil company. 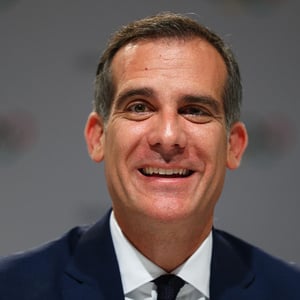