Edwin Edwards net worth: Edwin Edwards is a former Governor of Louisiana, convicted felon and reality TV star who has a net worth of $10 million. Edwin Edwards is one of the most famous politicians in Louisiana. He served as the state's 50th Governor over four non-consecutive terms starting in 1972. Edwards is also famous for being convicted of 26 counts of extortion, racketeering, money laundering, mail fraud and wire fraud.

He subsequently served 8 years in prison. He was released in January 2011, a few months early thanks to good behavior. Edwin and his wife Trina Edwards are now starring in their own reality show "The Governor's Wife" which airs on A&E. Trina is 35 years old and Edwin is 86. In August 2013 the couple welcomed their first child together. Edwards has several children from previous marriages. 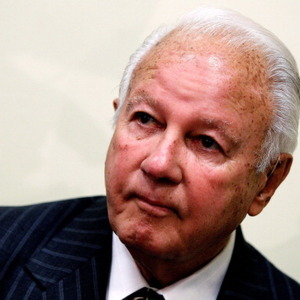