How much is Cory Booker Worth?

Cory Booker net worth and salary: Cory Booker is an American politician who has a net worth of $3 million. Cory Booker was born in Washington, D.C. in April 1969. He is a Democrat who graduated from Stanford University, Queen's College, Oxford and Yale Law School. From 1998 to 2002 Booker served as a Member of the Newark City Council from the Central Ward. From 2006 to 2013 he was the 36th Mayor of Newark, New Jersey and since 2013 he has been a United States Senator from New Jersey. Booker played college football and earned a Rhodes scholarship. He became the first black U.S. Senator from New Jersey in 2013 when he won the general election after Frank Lautenberg passed away in office. Booker co-founded video sharing technology company Waywire in 2012 but later resigned. Outside of his $174,000 Senate salary, Cory Booker has earned a little over $1 million in royalties from his book "United". He earned $325,000 in royalties in 2016 and and $400,000 in 2015. According to his 2017 wealth disclosure, Cory reported $550,000 in assets, mostly in brokerage accounts.

Cory Booker Finances and Tax Returns: According to his tax returns, between 1998 and 2013 Cory earned a total of $4 million before taxes. He paid $1,057,359 worth of taxes during that period. His total earnings from speeches between 2000 and today, top $2 million before taxes. During that same time period he has given more than $400,000 to charity. He earns around $152,000 per year as a United States Senator. 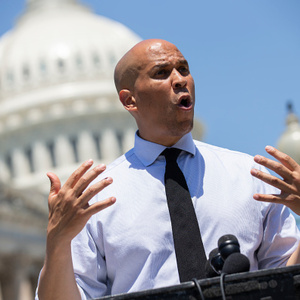