Charles B. Rangel Net Worth

in Richest Politicians › Democrats
Charles B. Rangel Net Worth:
$2.5 Million

Charlie Rangel net worth: Charlie Rangel is an American politician who has a net worth of $2.5 million dollars. Charlie Rangel was born in New York, New York, and grew up with his mother and grandmother. He was an excellent student as a child, but dropped out of school when he was in his teens to work.

He eventually joined the US Army, and fought in the Korean War. After his unit found itself under heavy fire and stranded, he led a group of 40 soldiers over a mountain range to safety, even though he was severely injured and only a private first class. After recuperating in South Korea, he returned to the front. He was honorably discharged in 1952, having achieved the rank of staff sergeant. He went on to graduate from New York University and then earned his law degree from St. John's University. After practicing law in New York throughout the early 60s, he moved into politics, and began to rise through the political ranks in New York State. In 1971, he was elected U.S. Representative for New York's 13th congressional district, and has served in that capacity ever since. He is the third longest-currently serving member of the House of Representatives. He is also a founding member of the Congressional Black Caucus and the first African-American to serve as the Chair of the House Ways and Means Committee. 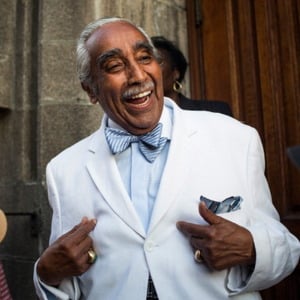