Prior to being elected mayor, he served as the New York City Public Advocate from 2010 to 2013. After graduating from university, he entered the political world when he served as campaign manager for Charles Rangel and Hillary Clinton. He was then elected as an official to the New York City Council, representing Brooklyn from 2002 to 2007.

After being elected mayor, de Blasio has focused on a number of key issues. These include police reform, marijuana decriminalization, less surveillance, and many others. He is generally considered a progressive liberal who has fought to address economic equality. During the run-up to the 2020 Presidential Elections, de Blasio briefly ran in the Democratic primaries before dropping out due to low poll numbers. He then endorsed Bernie Sanders.

Early Life: Warren Wilhelm Jr. was born on May 8th of 1961 in Manhattan, New York City. Although he was born in New York, he actually grew up in Norwalk, Connecticut alongside two brothers. In 1966, his family relocated to Cambridge, Massachusetts. His father and mother eventually split up, and Warren was raised primarily by his mother's side of the family. By the age of 18, his father had committed suicide while suffering from incurable lung cancer.

After graduating from secondary school in 1979, he attended New York University and studied metropolitan studies eventually earning a Bachelor of Arts. He then continued his education and earned a Master of International Affairs from the School of International and Public Affairs at Columbia University. By 1983, Warren changed his last name to Blasio-Wilhelm. Eventually, he changed his name to Bill de Blasio in 2001, mostly because he felt a greater connection with his mother's side of the family.

Bill's family has very strong roots in the US government. His paternal uncle worked for the CIA in Iran. His mother services in the Office of War Information during the Second World War, and his father became a budget analyst for the federal government after fighting in the Pacific theater with the United States Army. After the war, his mother worked as a public relations specialist with the Italian consulate. 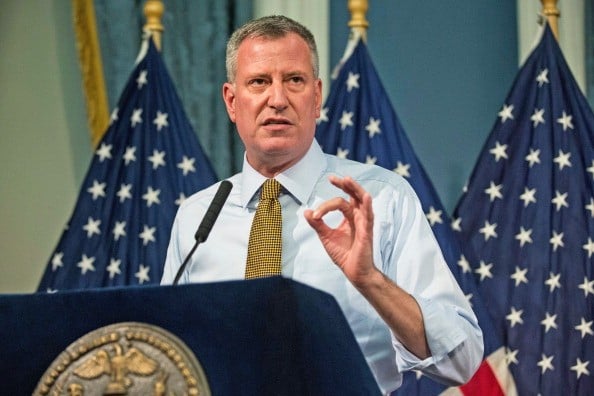 Career: After leaving university, de Blasio earned experience at the New York City Department of Juvenile Justice, and nonprofit organizations. He then worked as a volunteer for David Hinks' mayoral campaign and subsequently became an aide at City Hall. Charles Rangel then chose de Blasio as his campaign manager in 1994. Three years later, he was the regional director for the United States Department of Housing and Urban Development. In 2000, he served as the campaign manager for Hillary Clinton's US Senate bid.

Just one year later in 2001, de Blasio focused on his own political goals and ran for the New York City Council. He then represented the 39th district, which encompasses several Brooklyn neighborhoods. In 2008, he became the New York City Public Advocate. In 2013, he announced that he was running for mayor. He eventually won the election and ran again in 2017 for re-election. During this second tenure, de Blasio was in charge during the Covid-19 crisis. His relationship with the NYPD has also been a major talking point during his mayoral tenure. Police reform has been a major priority for de Blasio, although this has caused a rift with police officers on many occasions.

In 2019, he sought the Democratic nomination for president. However, it soon became clear that he was not a popular candidate. He then conceded and publicly endorsed Bernie Sanders.

Relationships: Bill de Blasio met his wife Chirlane McCray through work at Mayor Dinkins' administration, and they were married in 1994. Over the course of their relationship, they have had two children together.

Real Estate: De Blasio has been extremely active in the real estate world over the course of his political career, and these activities have raised some questions. In 2019, Bill oversaw the city's purchase of 17 buildings in Brooklyn. When the city first appraised the buildings, they were assessed at a total value of $50 million. When a private appraiser looked at them, he gave a value of $143 million. The city ended up paying $173 million – far more than anyone could have expected.

So why the increased price? Many reporters pointed out that the identity of the landlords who were selling the buildings might have something to do with it. One of these landlords was Frank Carone, a longtime ally of de Blasio who holds a seat on the mayor's federal political action committee. He helped de Blasio rack up a number of important donations. The corruption concerns here were quite obvious.

The mayor faced controversy once again when it was revealed that he paid just $9,000 in property taxes per year on a two homes he personally owns that are worth over $3.5 million. The property tax normally should come to around $35,000 per year. This was due to the city's property tax system that gives special treatment to older properties. One of his homes was worth $1.76 million. Another property in the same area is worth an estimated $1.88 million. The pair have rented these properties out in the past for up to $1,825 per month. Ironically, Bill de Blasio himself has criticized this tax system in the past, calling it "unfair."