He later graduated from Yale Law School and subsequently opened a law firm with Marvin Katz, who would later become a federal judge. He married Joan Levy, an American businesswoman and politician, and they had two sons. Levy held a seat on the Philadelphia City Council for four terms until she was defeated for re-election in 1995 by Frank Rizzo, Jr. Specter's stance on abortion was that he personally opposed it, but was a supporter of a woman's right to choose. His position on gay rights involved supporting some LGBT rights, and he voted to prohibit job discrimination based on sexual orientation, but was opposed to same-sex marriage. He strongly opposed gun control, voting against the Brady Bill, background checks at gun shows, the ban on assault weapons and trigger locks for handguns. His voting record, regardless of which party he was with at the time erred at least 50% on the Democratic side. Arlen Specter announced in 2005 that he had been diagnosed with an advanced form of Hodgkin's lymphoma, a type of cancer. Specter eventually passed away from complications of non-Hodgkin's lymphoma at the age of 82 on October 14, 2012. 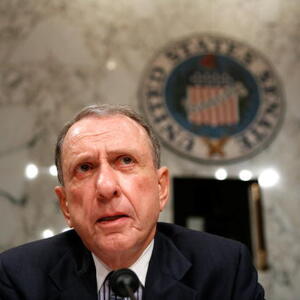