Andrew Yang's net worth: Andrew Yang is an American entrepreneur, philanthropist, author, politician, and lawyer who has a net worth of $600 thousand. He first gained widespread fame in 2019 as a Democratic candidate for President of the United States. He campaigned on the platform of Universal Basic Income which he called the Freedom Dividend. His supporters called themselves "The Yang Gang."

Early Life: Andrew M. Yang was born in Schenectady, New York on January 13, 1975. He grew up in Westchester County, New York with his older brother Lawrence. His parents met at graduate school at the University of California, Berkeley. They emigrated to the U.S. from Taiwan in the 1960s. As a kid, Yang played Dungeons & Dragons, tennis and the piano. He was bullied at school as one of the few Asian students in his town. Yang was academically gifted and skipped a grade, so he was also one of the smaller kids in his class, leading to further bullying. At 12, Yang scored 1220 out of a possible 1600 on the SAT, which earned him admission to Johns Hopkins University's Center for Talented Youth, a summer program for gifted kids, which he attended for the next five summers.

Yang's parents sent him to the elite Phillips Exeter Academy in New Hampshire. There, Yang was part of the 1992 U.S. National Debate team that competed in London at that year's world championships. After graduating in 1992, Yang enrolled at Brown University in Providence, Rhode Island. He majored in economics and political science. He graduated in 1996 and enrolled at Columbia University's law school, which he graduated from in 1999,

Career: After graduating from law school, Yang started his career as a corporate attorney in Manhattan. However, after just five months he resigned because the work was both grueling and unfulfilling. In February 2000, Yang founded Stargiving, a website for celebrity-focused charitable fundraising. The site was a victim of the first dot-com bubble's bursting. From 2002 to 2005, Yang was employed as the Vice President of a health care startup. Then, in 2005, he joined his pal Zeke Vanderhoek at a test prep company called Manhattan Prep. By 2006, Yang had taken over as CEO. Manhattan Prep focused on the GMAT mostly. Under Yang's direction, the company grew from five to 69 locations. In December 2009, Manhattan Prep was acquired by testing giant Kaplan, Inc. Yang left his role at the helm of Manhattan Prep in early 2012.

In 2011, Yang went out and created a new nonprofit program called Venture for America, which has the mission ""to create economic opportunity in American cities by mobilizing the next generation of entrepreneurs and equipping them with the skills and resources they need to create jobs." VFA took the top college graduates in the U.S. and gave them two-year fellowships with startups in developing cities across the U.S.  instead of those graduates being recruited into the same boring, unfulfilling corporate jobs in the same big cities. He launched VFA with $200,000 and trained 40 graduates in 2012 and 69 in 2013 in jobs in Baltimore, Cincinnati, Cleveland, Detroit, Las Vegas, New Orleans, Philadelphia, and Providence, Rhode Island, home of his alma mater Brown University. In 2014, VFA had 106 new graduates in its program and added Columbus, Miami, St. Louis, and San Antonio. In 2017, VFA was in about 20 cities including Atlanta,  Denver, and Nashville, among others. In March 2017, Yang stepped down from his position as CEO of VFA to focus on his presidential campaign.

Andrew Yang wrote the books "Smart People Should Build Things: How to Restore Our Culture of Achievement," "Build a Path for Entrepreneurs," and "Create New Jobs in America and The War on Normal People: The Truth About America's Disappearing Jobs and Why Universal Basic Income Is Our Future." 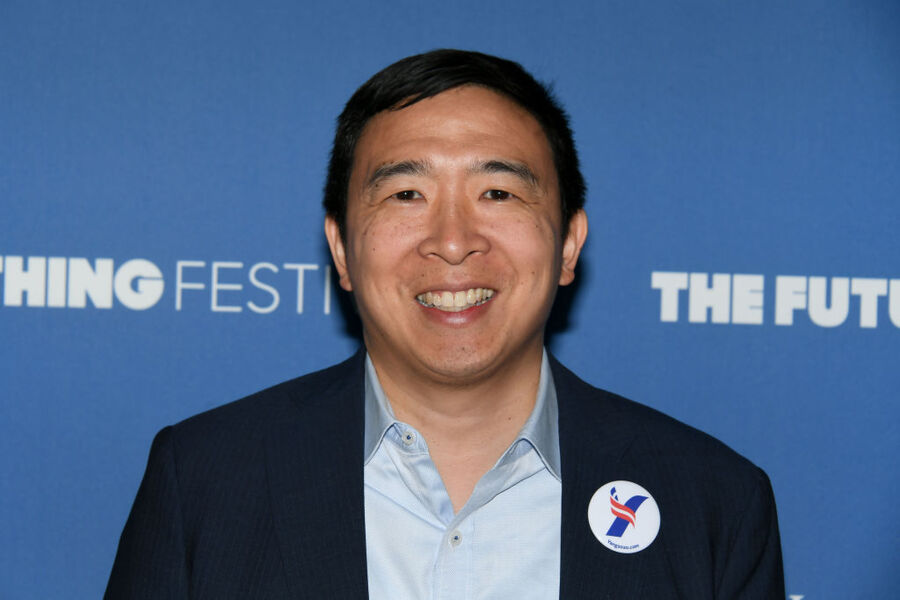 Political Career: Yang announced he was running for the Democratic nomination in the 2020 U.S. presidential election in 2017. One of his best-known policies is the Freedom Dividend, which would provide every American over 18 with $1,000 a month in universal basic income. Yang's campaign has largely focused on responding to the rapid development of automation, which is increasingly leading to challenges in the workforce and economic instability.

He has also become known for his campaign slogans, including "Humanity First," "Not Left, Not Right, Forward," and "Make America Think Harder" ("MATH").

In an August 2020 interview with CNN, Yang called Donald Trump's attempt to delay the presidential election another distraction from his disastrous handling of COVID-19. Yang recounted the stat that 72% of Americans feel they are living in the worst time of their lives, which do not bode well for Trump's chances, according to Yang.

Personal Life: Andrew Yang married Evelyn Lu in 2011. They have two sons, one of whom is autistic.

Yang attends the Reformed Church of New Paltz. He considers himself spiritual and has said that his journey is still in progress.

In an interview with The Hill, Yang said that his favorite president is Theodore Roosevelt and that he is the godfather of Roosevelt's great-granddaughter. 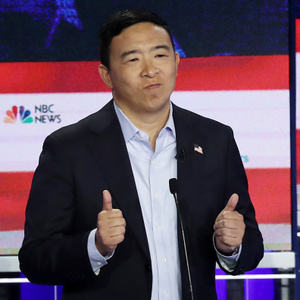