Amy Klobuchar net worth: Amy Klobuchar is an American lawyer and politician who has a net worth of $1.5 million. That's not enough to make her one of the 70 wealthiest members of the Senate. Put another way, Amy is one of the 30 poorest Senators in the U.S. as of 2019. According to her most recent government financial disclosure, Amy's biggest asset is a Vanguard investment account that is worth $250,000. She owns a similar Fidelity account that's worth $175,000. Going back to 2006, her net worth has ranged from a low of $465,000 in 2009 to its current high of $1.5 million. She and her husband earned a combined total of $299,000 in 2018. That is roughly how much they have earned together every year going back to 2006.

Amy Klobuchar was born in Plymouth, Minnesota in May 1960. She is a Democrat who graduated from Yale University and earned her JD from the University of Chicago. From January 1999 to January 2007 she served as County Attorney of Hennepin County. Klobuchar became a Ranking Member of the Senate Rules Committee in January 2017. In 2007 she became a United States Senator from Minnesota. She worked as a partner at two law firms in Minneapolis before entering into politics. In 2019 she announced that she was running for the Democratic nomination for President of the United States for the 2020 election. Amy Klobuchar married John Bessler in 1993 and her father is Jim Klobuchar. She has served on several committees including Committee on the Judiciary, the Joint Economic Committee, Committee on Commerce, Science and Transportation, Committee on Agriculture, Nutrition and Forestry, and more. 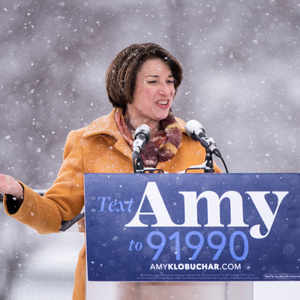