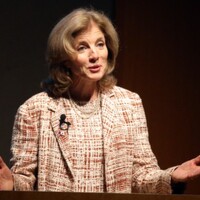 Caroline Kennedy Net Worth: Caroline Kennedy is an American attorney, author and diplomat who has a net worth of $250 million dollars. Born November 27, 1957 in New York City, New York, Caroline Kennedy is the daughter of the late U.S. President John F. Kennedy and the late First Lady Jacqueline Bouvier Kennedy. She is also the niece of the late Senators Robert F. Kennedy and Ted Kennedy. Caroline was a young child when her father was assassinated in 1963. The Kennedy family then settled in the Upper East Side of Manhattan, where she attended school. Kennedy graduated from Radcliffe College and worked at New York City's Metropolitan Museum of Art, where she met her future husband, exhibit designer Edwin Schlossberg. She received a J.D. degree from Columbia Law School and Kennedy's professional life now spans law and politics as well as education and charitable work. She has also acted as a spokesperson for her family's legacy and co-authored two books on civil liberties with Ellen Alderman. In the 2008 presidential election, Caroline and her uncle Ted Kennedy endorsed Democratic candidate Barack Obama for President early in the primary race. After Obama's selection of then-Senator Hillary Clinton as Secretary of State, Kennedy expressed interest in being appointed to Clinton's vacant Senate seat from New York, but she later withdrew from consideration, citing personal reasons. On July 24, 2013, President Barack Obama announced Kennedy as his nominee to be Ambassador to Japan, to succeed Ambassador John Roos. On October 16, 2013, the U.S. Senate confirmed Kennedy by unanimous consent as the next Ambassador to Japan. She is notably the first female American ambassador to Japan. On November 12, 2013, she was sworn in by Secretary of State John Kerry.