Noynoy Aquino Net Worth: Noynoy Aquino is a Pilipino politician who has a net worth of $1.2 million. Born Benigno Simeon "Noynoy" Aquino III on February 8, 1960 in Manila to a family of politicians, he has been the 15th President of the Philippines since 2010. Before becoming a fourth-generation politician, Aquino took his BA in Economics from Ateneo de Manila University in 1981, when he joined his family in their exile to the States.

Two years later, he got back to the Philippines following the assassination of his father. At the time, Noynoy Aquino held several positions working in the private sector. It was in 1998 that he was first elected to the House of Representatives as Representative of the 2nd district of Tarlac province. After two subsequent re-elections (in 2001 and 2004), he got banned from running for re-election to the House again in 2007 when he got elected to the Senate in the 14th Congress of the Philippines instead. In 2009, he officially confirmed his candidacy in the 2010 presidential election, held on May 10, 2010. On June 30, 2010 Aquino was already sworn into office as the fifteenth President of the Philippines, at the Quirino Grandstand in Rizal Park, Manila. 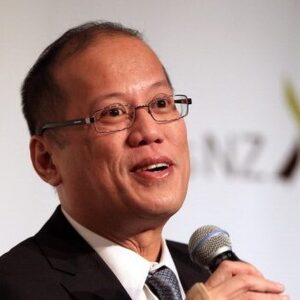