Ban Ki-moon net worth: Ban Ki-moon is the current Secretary-General of the United Nations who has a net worth of $1.5 million dollars. born in Eumseong County, North Chungcheong Province, Japanese Korea on June 13, 1944, Ban attended Seoul National University as well as Harvard University and is currently married to Yoo Soon-taek with three children by the names of Seon-yong, Woo-hyun, and Hyun-yee.

He is best known for being the eighth Secretary-General of the UN and assumed office on January 1, 2007. His deputies include Asha-Rose Migiro and Jan Eliasson, and he was preceded by Kofi Annan. His interests have leaned towards global warming and Darfur. He was recently recognized as the world's 32nd most powerful person according to the Forbes "List of the World's Most Powerful People. Prior to being Secretary-General, Ban was Minister of Foreign Affairs and Trade between January 17, 2004 and December 1, 2006. The President at the time was Roh Moo-hyun, and the Prime Ministers included Goh Kun, Lee Hae-chan, Han Duck-soo, and Han Myeong-sook. He was preceded by Yoon Young-kwan and succeeded by Song Min-soon. In the beginning of his career as Secretary-General, Ban was immediately faced with the death penalty designated for Saddam Hussein, which he refused to condemn, claiming the capital punishment is not the decision of one person. Ban's focused remained on global warming, the Middle East, Darfur, Myanmar, and LGBT rights throughout the years. He presented a speech to the United Nations Human Rights Council in 2012 in effort to fight homophobia and decriminalize homosexuality around the world. Among the officials in the South Korean Foreign Ministry, Ban developed nicknames including "the Bureaucrat" or "the administrative clerk," "the slippery eel," and "stand-up guy." 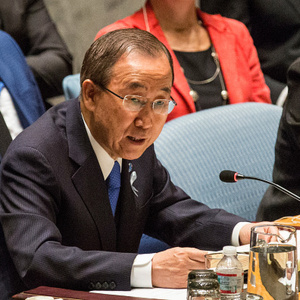